VU Donator
Gold Contributor
Member For 3 Years
ECF Refugee
No idea how I hadn't heard of this, but I'm sharing in case anyone else didn't know who loved this tank as much as I did. Taifun did another limited run of this RTA, I've owned several GT4's, still have 2 and it's in my top 5, but nothing I've vaped touches the GT3. I was pretty bummed when I broke my original GT3 and trying to find a used one in the last two years has proven impossible.

Enushi has some in stock at the time of this posting for any other fans out there.
Last edited: Jan 2, 2022 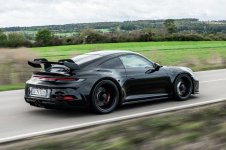 I'd rather have this GT3! haha

Staff member
Senior Moderator
VU Donator
Diamond Contributor
Member For 4 Years
VU Patreon
I didn't know which car that was, don't keep up like I used to, but it was screaming "Porsche" to me, and sure enough! Damn that is beautiful!

Bronze Contributor
Member For 4 Years
ECF Refugee
Reddit Exile
Has anyone tried this yet?

Silver Contributor
Member For 4 Years
I have a GT3 clone I got from FT a few years ago that I never liked for some reason. Remembered it when I read this thread a few days ago, dug it out and tried it again yesterday. Had trouble getting it to feed properly and remembered that was why I stashed it in the first place