Well, this wasn’t what I expected from a 28mm dual-coil RTA with side and bottom airflow.

In fairness, the Fat Rabbit RTA does do most of what I expected, it’s just that it does a lot of things that I didn’t expect. 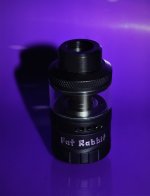 Aesthetically, it’s a big and chunky 28mm RTA reminiscent of some of the large Steam Crave RTAs, while I don’t mind the Fat Rabbit logo, I would have preferred it without Fat Rabbit written on the side, however I think that with other color versions the logo/writing is not as prominent.

Overall, it looks nice when paired with an equally big and chunky dual battery mod, actually at 28mm you’re going to need a largish mod to avoid overhang.

Both the knurled top-cap and the deck open with a quarter turn, while I don’t have major preferences for the top-cap, being able to remove the deck with quarter turn is a nice touch.

Of course with a 28mm RTA, there is a lot of room on the postless deck, with two rows of six airflow slots in the center of the deck and little ledges between the wicking ports and airflow slots. Are these ledges to prevent you from covering the airflow with cotton or to prevent leaking? Maybe both, maybe neither.

There is an airflow control ring for the bottom airflow, which is easy to grab hold of when the RTA is on and off the mod, due to slight ridges. 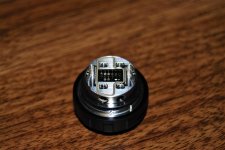 For my first build, I went for single-coil. Due to the large deck and large wicking ports, I went for a 4.5mm kris clapton. I actually have no idea what kris clapton wire is, I got the wire a couple of years back and thought I should try it.

I tried it first with bottom airflow fully open and side airflow 50% open at 65w, at while I got very good flavor, it was too warm for my liking, so I opened everything 100% and from 70-80w it gave a nicely warm vape with very intense flavor and a lot of vapor.

For my second build, I went with the provided 3.0mm fused claptons and it gave me a very similar experience to the single 4.5mm coil – a warm vape with great flavor and a room full of clouds at 75 – 90w. Between the first two builds, the second was my slight favorite however the convenience of a single-coil build always appeals to my laziness.

However, two things bothered me – firstly something personal, I don’t want to vape at 70w+ and secondly, with 3.0mm dual-coils, I was struggling to get the center of the coils over the bottom airflow.

So, for build number three I went for dual 28g 2.5mm claptons, this let me get much more of the coils over the bottom airflow and nailed it for me.

This pair of coils read at 0.38ohm and from 45-60w with all of the airflow fully open, the flavor is outstanding, and while not as cloudy as the first two builds, there’s still far more vapor than I would expect from vaping at a relatively low wattage. 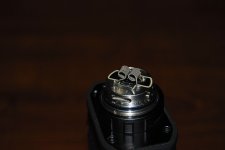 I was careful with all three builds not to thin out the cotton too much, because the wicking ports are pretty large – that’s why I didn’t want to use a small coil for my single-coil build.

Either way, I had zero leaks from either airflow, zero moisture under the RTA and during chain vaping wicking did not prove to be an issue. 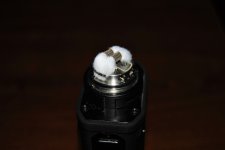 Looking at the design of the airflow, I imagined that I would be closing it down a lot in order to get decent flavor, but this wasn’t the case.

I never found it necessary to close more than two holes on the side airflow and always kept the bottom airflow fully open.

Overall, the airflow is nicely adjustable, smooth and slightly restricted in comparison to most dual-coil RTAs that I’ve used in the past.

My personal take on this RTA – this is exactly what I’ve been looking for in a dual-coil RTA for a long time, something that I can vape at single-coil wattage levels, that gives good flavor, has smooth airflow and has the vapor production of a dual-coil RTA.

My reviewer’s take on this RTA – the Fat Rabbit’s strong point is that it’s versatile: single/dual-coil, high/low power – get the build right, tune it with the airflow and you’re going to find something to suit your style and give nice flavor.