Staff member
Diamond Contributor
ECF Refugee
Vape Media
The latest issue of Marvel’s X-Men comic just changed everything we thought we know about longtime mutant villain Apocalypse. The powerhouse bad guy has enacted numerous evil plans over the years that all stem from his “survival of the fittest” mantra, and while he has often touted various philosophical reasons for why the weak must perish so the strong can survive, we now know the real reason that ideology means so much to him in the first place. Before we get into the big reveal, it’s important to know that the X-Men’s current status quo is quite different from what you may be used to. Currently, all mutants live together on the mutant island nation of Krakoa. This includes all villainous mutants, who were given a pardon by Charles Xavier, so now Apocalypse is not only an ally of the X-Men but he sits on their governing council and is a key player in the future of mutantkind. If you want to know more, this video recaps everything you need to know about the current state of the X-Men: [ignvideo url="https://www.ign.com/videos/2019/10/09/marvels-x-men-now-have-a-bold-new-status-quo-ign-now"] Now, let’s dig into the big news about Apocalypse. Warning: beware of full spoilers for X-Men #13, the entire X of Swords event, and pretty much every X-Men comic from the past 40 years!


The New Origin of Apocalypse​

The origin of Apocalypse has undergone major changes since writer Jonathan Hickman kicked off his X-Men run in 2019, and now the ongoing X of Swords crossover event by Hickman and Tini Howard puts Apocalypse front and center to reveal his true beginnings. Apocalypse was originally styled as a diabolical mutant from ancient Egypt who went on to become a tyrant bent on world domination, and all of that still stands, but this new era of X-Men fleshes him out with a richer and more nuanced backstory. As it turns out, back in ancient times Apocalypse was actually a defender of Earth who battled all sorts of monstrous foes to keep it safe. Fighting alongside him was a wife we never knew he had named Genesis, a powerful mutant with the ability to manipulate plant life. The couple had four children with incredible powers of their own, who went on to become the first iteration of Apocalypse’s Four Horsemen. Together, this family ruled over and defended the mutant island nation Okkara. [caption id="attachment_2429162" align="alignnone" width="720"] 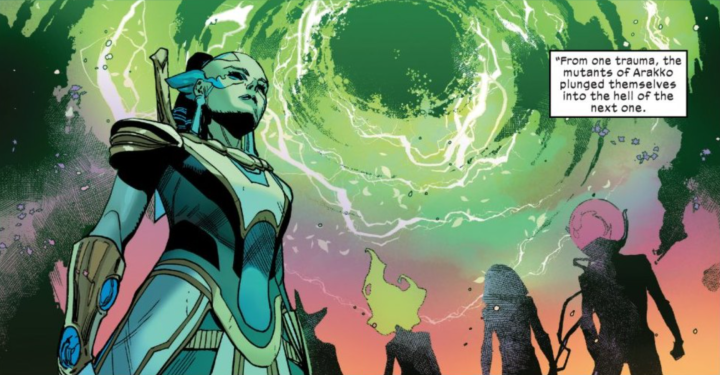 Apocalypse's wife and kids. (Image Source: Marvel Comics)[/caption] Everything changed when Apocalypse and his family were drawn into a war to stop demons invading Earth from another dimension called Amenth. The demons’ leader Annihilation used a weapon called the Twilight Sword to strike Okkara in two, with the half named Arakko falling into the dark dimension and Krakoa remaining on the earthly realm. The two armies fought to a standstill and eventually met to parley, and the result was Annihilation offering to end the conflict in exchange for a show of strength from the mutants. Ultimately, Genesis stepped forward, volunteering herself and her children to travel into the dark dimension to stand guard on Arakko, sealing the breach behind them. Apocalypse said he wanted to join her, but she denied him, speaking the words that would go on to define one of Marvel’s greatest villains: “And yet, we both know you can’t, my love. You’re not strong enough.” [caption id="attachment_2429164" align="alignnone" width="604"] 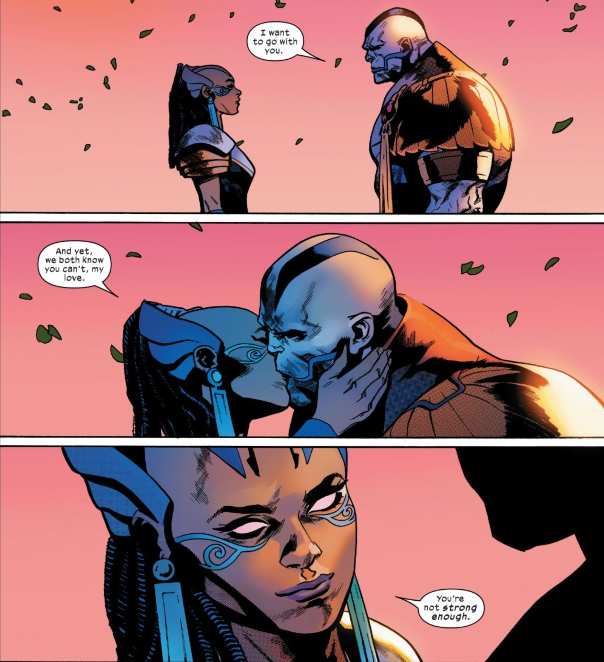 Harsh. (Image Source: Marvel Comics)[/caption] Genesis charged Apocalypse with staying behind and using the time their sacrifice would buy to make the world strong enough to stand against their demonic enemies. “Judge them,” Genesis said. “So that they--that you--become what we need. See that only the fittest remain.” And with that, Apocalypse was left alone, sad, and traumatically motivated to toughen up the world by whatever means necessary.


A New Perspective on Apocalypse​

With this revelation, we can look back on all of Apocalypse’s evil schemes in a new light. Obviously this is quite the big retcon, and some stories fit into this new context better than others, but ultimately what this fundamental change offers is an emotional reason for Apocalypse’s fanatical devotion to extreme Social Darwinism. Every plan he’s ever hatched while preaching that “survival of the fittest” mantra was done in tribute to his one true love and his lost family. And while Apocalypse clearly went way too far time and time again, we now know that he was secretly acting with the world’s best interest in mind. It was his personal mission to make the world strong enough to repel the demons when they inevitably invaded again. [widget path="global/article/imagegallery" parameters="albumSlug=x-of-swords-every-comic-in-marvels-epic-x-men-crossover&captions=true"] This isn’t to say that Apocalypse is now retroactively redeemed and absolved of his countless sins. All that blood is still on his big blue hands, but now we have a greater understanding of why he would go to such great lengths to change the world. He was told he was weak, and everything he’s done since that moment was done in service of becoming strong--and making the world strong--so the loss of his loved ones wouldn’t be in vain. But given how he went about it, it’s clear that Apocalypse overcompensated for his own weakness by becoming a monster. In classic tragic villain fashion, he became a threat to the very world he had pledged to protect.


The Future of Apocalypse​

This Apocalypse history lesson came in X-Men #13 by Hickman and artists Mahmud Asrar and Sunny Gho, which is the tenth chapter in the X of Swords crossover event. The event kicked off when, you guessed it, the breach in dimensions opened back up and the denizens of Arakko returned. Only, when Apocalypse was reunited with his children, they turned on him and tried to kill him. Apocalypse managed to escape with grievous wounds, leaving the X-Men to stand up to the invaders of Arakko. [caption id="attachment_2429168" align="alignnone" width="720"] 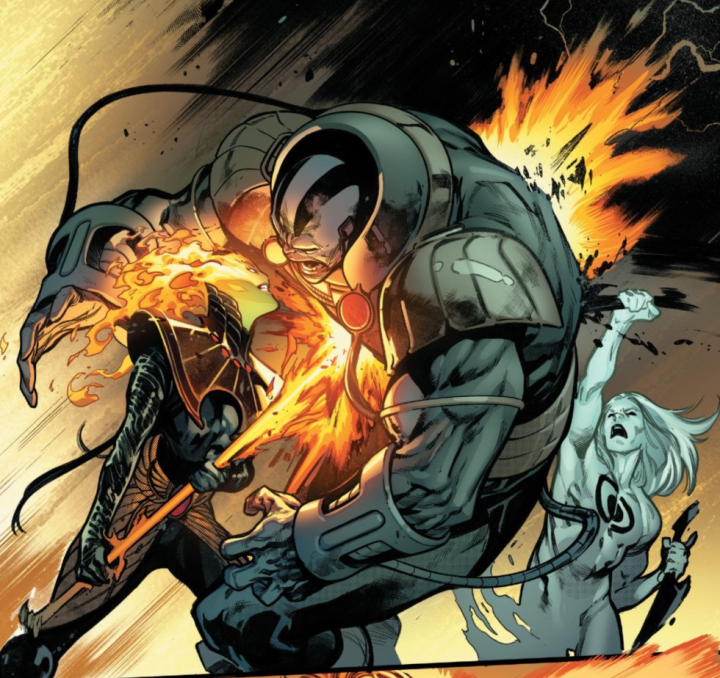 That's one way to sort out daddy issues. (Image Source: Marvel Comics)[/caption] Rather than engage in an all-out war, the controller of the nexus of reality Saturnyne staged a contest where the 10 best sword fighters from each side would duke it out to decide a winner. Kind of like a Mortal Kombat tournament. Apocalypse was one of the chosen combatants, but he wasn’t exactly in fighting shape after being attacked, so the X-Men’s healers set to work on fixing him. We saw Apocalypse in a rare state, shrieking in pain with tears streaming down his face. And it was in this vulnerable state that En Sabah Nur finally revealed his tragic backstory -- and why he must be strong. With Apocalypse recovered, he set out to reclaim his fearsome sword The Scarab from an ancient Egyptian pyramid, and now he’s poised to fight in the contest, so we’ll finally get to see if he’s strong enough. [caption id="attachment_2429169" align="alignnone" width="720"] 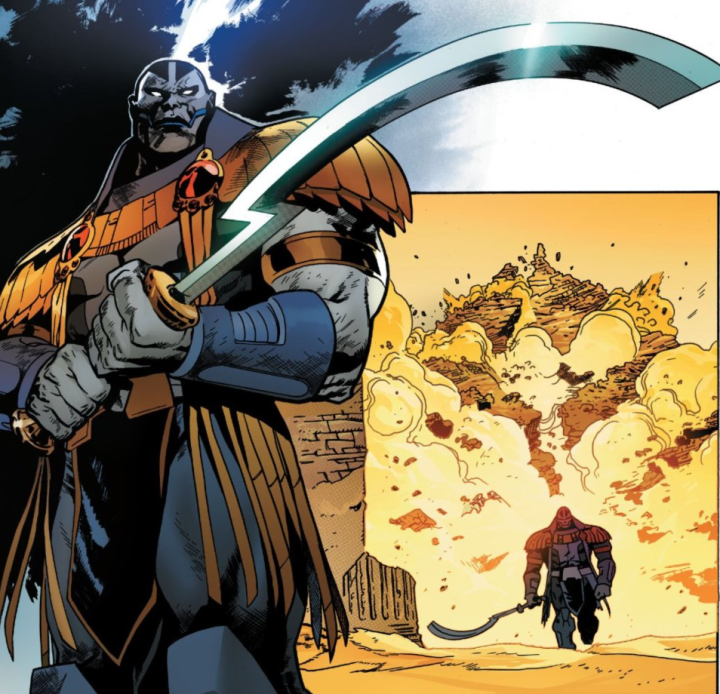 Apocalypse has joined the fight. (Image Source: Marvel Comics)[/caption] If you want to hop into this x-citing Marvel event, check out our guide on everything you need to know to read X of Swords. [poilib element="accentDivider"] Joshua is a Senior Editor and Producer of Features at IGN. If Pokemon, Green Lantern, or Star Wars are frequently used words in your vocabulary, you’ll want to follow him on Twitter @JoshuaYehl and IGN.