Pod reviews aren’t really pod reviews – the vast majority of what makes a pod system succeed or fail is its coils. You could make the world’s best pod system and it would still suck if it came with terrible coils.

I’ve already used, reviewed and enjoyed the coils that come with the XLIM SQ in the XLIM Pod, so I know they how good they are – time to see if there are any advantages in using them in the SQ version of the XLIM. 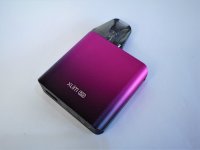 What do you get?
This is all very standard for a pod system, apart from something that I haven’t seen before – there are two available versions: my version with the 0.6 and 0.8ohm pods, and another version that comes with 0.8 and 1.2ohm pods. It’s a very minor detail, but being able to specify which pods you want is a very nice touch from OXVA. 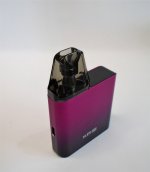 There’s not much to say – it’s the same form factor as other similar square pods in this market sector. The color fade looks sexy, the black plastic top/bottom provides a nice contrast (and scratch protection), the airflow control is exactly the same as on the XLIM pod.

There’s a small light indicator on the front panel that for charging, battery levels, etc.

As with the XLIM pod, my only complaint is that the USB charge port is on the bottom rather than on the side. 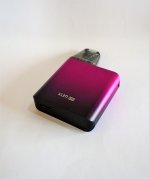 The 2ml pods are slightly tinted, but not so dark as to make seeing juice levels difficult and are held securely in place by a pair of magnets.

The pods are side-fill, and as I’ve stated in previous reviews – side-fill is best, you may not agree with me, but I’m opinionated, so I’m going to stick with that opinion.

The mouth pieces has a very comfortable feel, it used to be my favorite, but I think that the current Argus pod mouth piece slightly edges it for comfort.

The coils are not removable from the pods, when your coil is dead – throw the pod away and fit a new one. I prefer this system, because even though it’s a little wasteful, fixed-coil pods are less prone to leaking. OXVA have just released a new XLIM with replaceable coils, although I have no idea if that system is compatible with previous XLIM pod systems. 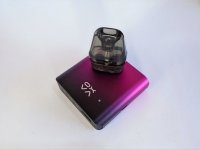 How does it perform?

These two pods are identical to those in the XLIM Pod and perform exactly the same in both systems, apart from the fact that the XLIM SQ does not have adjustable power. When I switched the pods between the two systems, it felt as if the SQ was operating at 80-100% of the maximum recommended wattage for the pods, when compared to the XLIM Pod. 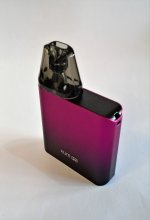 I don’t consider the XLIM SQ to be restricted DL even on it’s most open airflow settings – you can get a restricted DL draw from it, but it’s a struggle and the MTL draw is much nicer.

The airflow has a three hole sliding system, however the three holes are not the same – the first hole to be closed down reduces the airflow by about 10%, the second by an additional 30% and the final one closes down the remaining 60%. You can close down all three holes to achieve a very tight MTL draw.

For me, the airflow is where OXVA have a clear advantage over other similar MTL pod systems – their airflow adjustment system is just better.

It’s worth mentioning that the SE has identical specs to the SQ, but is a ‘stick-style’ pod system, rather than the ‘square-style’ of the SQ. However, I might be completely incorrect, because I’ve never actually used it.

The XLIM SQ was provided by OXVA for the purposes of this review. 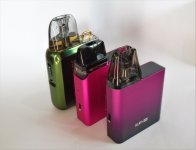