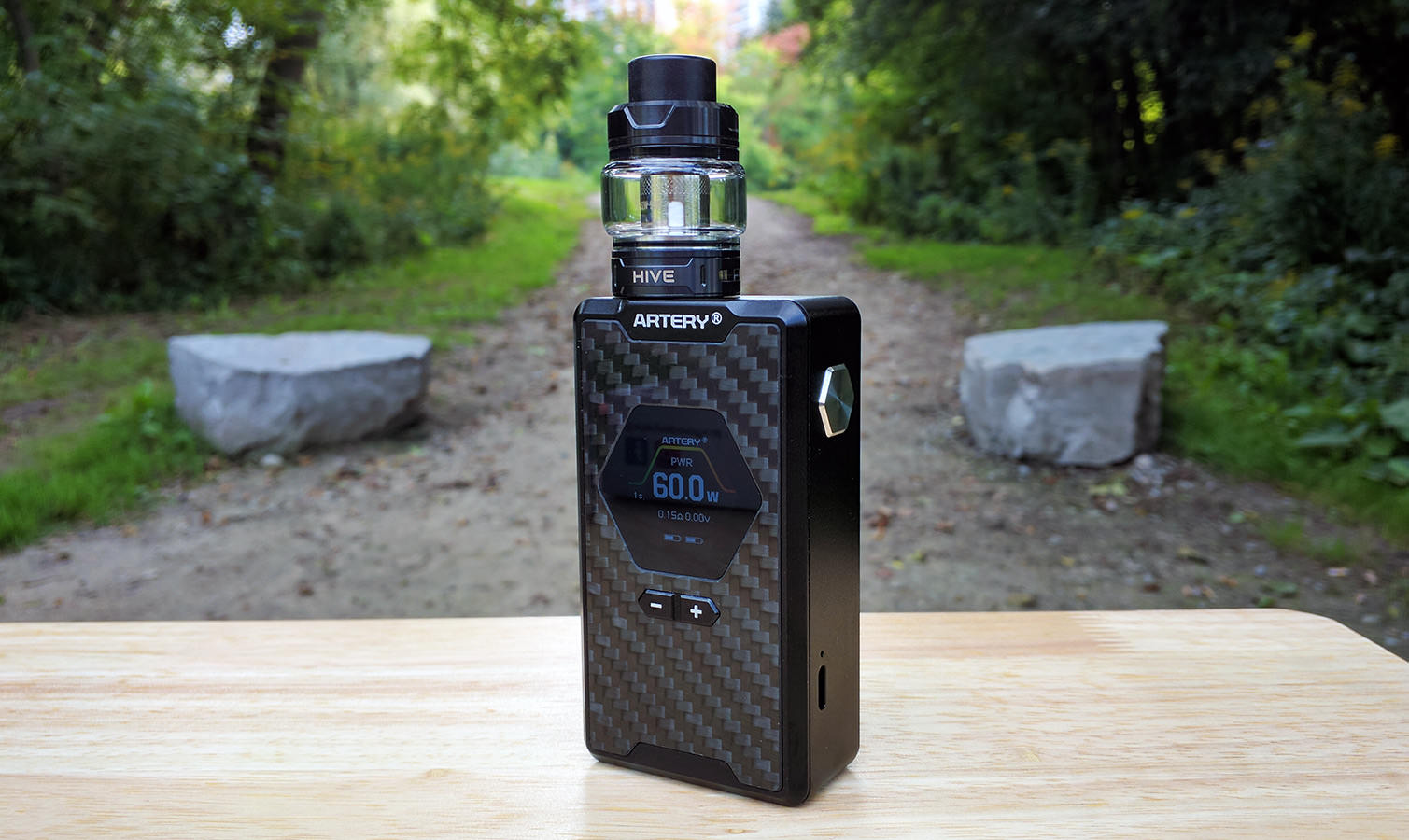 I've been using the Artery Hive 200w kit for about two months now. I'm a little late with this, hopefully this helps out anyone who's still on the fence about it.

It's a dual 18650 regulated mod that goes up to 200 watts. It boasts a lot of great features, like balanced charging, 0.01s firing delay, a hexagonal screen and a new firing mode called "Flavor Mode", just to name a few. It also comes with a subohm tank tank with mesh coils.

I'l try to keep this short and get to the point as fast as I can.

Body
It's got a nice rectangular metal body. It's not as compact as the Innokin Proton or Smoant Charon Mini but it's not oversized either. The weight seems proportional to the size. The metal body and the beveled edges make it extremely satisfying to hold.

My unit has carbon fiber sticker on the front. It sticks out half a millimeter above the face. I am not a fan of it at all, it looks like an aftermarket sticker. I wish the front was was smooth and of one finish.

The back is super nice. They have their bee logo over textured diagonal lines. It looks great and offers some grip to the mod.

Screen & Menu
This is one of the prettiest screens I've seen in vape mods. The screen hexagon shaped, following the overall bees/hive design theme of this mod. It's a nice change of pace from your typical rectangular screens.

The colors are beautiful and saturated, and the black is deep and rich. It almost looks like a phone AMOLED screen. There's no light bleed. The resolution seems high enough to avoid any noticeable aliasing.

The UI is beautifully designed as well, it takes full advantage of the screen's rich blacks. For example the colorful items on the screen turns a dark shade of gray when you lock the mod, leaving only the lock icon illuminated. The menu system also makes heavy use of the hexagon shape.

You can click the fire button twice to cycle between green, yellow, orange, purple, blue and white color for the text color. The main screen shows a separate battery indicator for each of the two batteries. No option to display battery percentage and sadly there's no puff counter either.

Battery Compartment
Battery compartment is amazing. It's very similar to the Geekvape Nova mod I reviewed a few days earlier. The pogo pins are awesome and they have just the perfect amount of tension. This mod will not tear your battery wraps. There's a ribbon to pull the batteries out but they stick out a little bit so you can just pry them off.

I just love the fact that these battery connectors are now the norm!

There's no rattle on the battery door either. The door doesn't slide around in your palm. Very impressive!

The fire button is hexagon shaped. It's a good button but tends to stick for half a second time to time. Not a deal breaker at all, just a minor gripe considering how nice the rest of the mod is.

The USB port is on the side of the mod, under the fire button. It's positioned a little higher than usual and that's a plus for me.

The mods reads the same resistance as the other mods I've tried. The mod tries to guess the wattage you want to use whenever you screw in a new coil in power mode. It works fairly well for the most part, it's usually around the ballpark I want to vape at.

Power mode is decent. Feels about the same as other mods at ~50 watts, and a few watts weaker at ~100 watts. Fire very quick, about as quick as Smoant's mods. Solid power delivery and it's a satisfying experience

Power curve mode works as you'd expect. You define a curve by setting multiplier values over time. Then you pick a base wattage and the chip changes the power depending on the multipliers you set. Great stuff here.

Temp control is what I ran into problems. I've tried several different attys with a variety of SS316L claptons, setups that constantly and reliably work in other mods that completely failed on this one.

The default SS profile throttles super aggressively. Simple setups like 0.25ohm single fused clapton coil in a Recurve, set to 55 watts could not reach that wattage before hitting a temp limit of 460F. Cranked that up to the max at 600F and then sometimes I reached 55 watts.

Playing around with TCR yields slightly better results, but it's a lot of trial and error since the baseline is so off the mark. A TCR value of ~125 led to a better experience than the stock SS profile, but not by much. I'd get one good puff, followed by several weaker, aggressively and inconsistently throttled puffs even when the wick was fully saturated.

The worst part of temp control in this mod is the ramp up time. Power mode fires at the set wattage in a fraction of a second, but man this thing is super slow when it comes to temp control. It takes a second or two to ramp up to the desired wattage, and often it doesn't even reach that before hitting a pretty standard value for temp limit. I usually take 2 - 3 second puffs and I got nothing but cold and wimpy vapor most of the time.

Many times I unscrewed the atty, waited till it cooled down and screwed it on to another mod and temp control worked just fine. I looked up some reviews of the Hive, and to my surprise nobody seems to have it this bad. May be I got a defective unit. If you've got one I'd love to hear how TC has been for you on this mod.

GIF of the ramp up time + throttling on default SS profile

GIF of the ramp up time + throttling on TCR (125) profile

The Hive has a special set of profiles under what's called "Flavor Mode". You can choose from Fruit, Cream, Dessert and Tobacco.

They are just pre-set power curves. Tobacco for example seems to start lower than the base wattage and tends to stay low for the most part, where fruit starts off high and comes back down to the base wattage.

The Hive cuts off the batteries at 3.20v, a pretty standard value.

Battery life was hard to gauge because there's no puff counter. I had to estimate it based on the time between battery changes, number of tank fills and the good old gut feeling. It feels about average compared to other mods out this year in it's price range. Didn't feel like it lasted shorter or longer.

The Hive kit comes with your standard mesh coil subtank that every manufacturer seems to make nowadays. The flavor and vapor production is perfectly serviceable, but after trying the Innokin Plexus and Freemax Mesh Pro these don't really cut it anymore. Don't get me wrong they're not bad, but you're really better off getting the mod and getting a separate atty for a few more dollars.

What's great about it

The Screen
Black level as good as your flagship AMOLED phone. Colors are vibrant and sparsely used. The UI makes great use of the hexagonal screen. They definitely put some thought into user experience and it clearly shows. One of my favorite screens of 2018, next to the Innokin Proton.

Build quality
The metal frame looks amazing and feels super comfortable thanks to the chamfered edges. Absolutely no rattle on the battery door. Battery sled is fantastic and so are the buttons. Really well made from a relatively unknown company

What's not so great

Temp Control
While the power mode and the power curve mode are excellent, temp control in this mod is simply broken. There's a long ramp up time followed by some very aggressive throttling. Reminds me of TC in super budget mods in 2015. 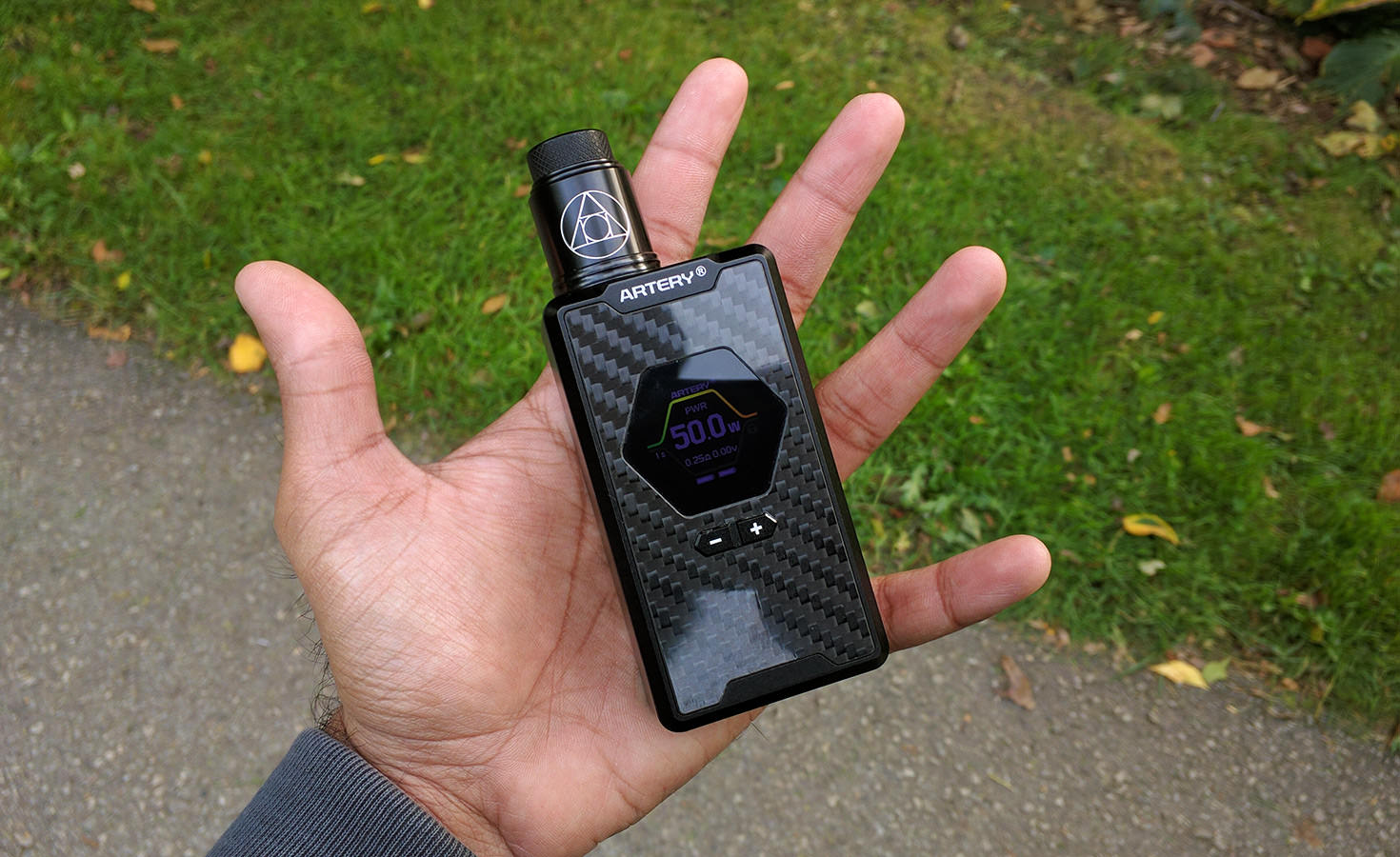 It's a good mod with a fresh twist on the screen and menu system. It performs fantastic in power mode and power curve mode. It fires super fast too! Unfortunately they need to go back to the drawing board and re-do the temp control mode, or at least release a firmware update.

Overall it's a polished, well thought-out product that gets all the basic things right. I generally prefer smaller, lighter, narrower mods but never once I found myself complaining about it's size, shape or weight. It's a good choice if you like a little bit of heft and don't use temp control.

II'm on Instagram now as well. I post daily photos of my stuff and gear that are in the review queue. I'd appreciate it if you guys checked it out!

Mod
Hive Subtank
You can find the mod at Heaven Gifts for $71.30. The kit is $82. Don't forget to lookup coupon codes as there's at least one active at all times! 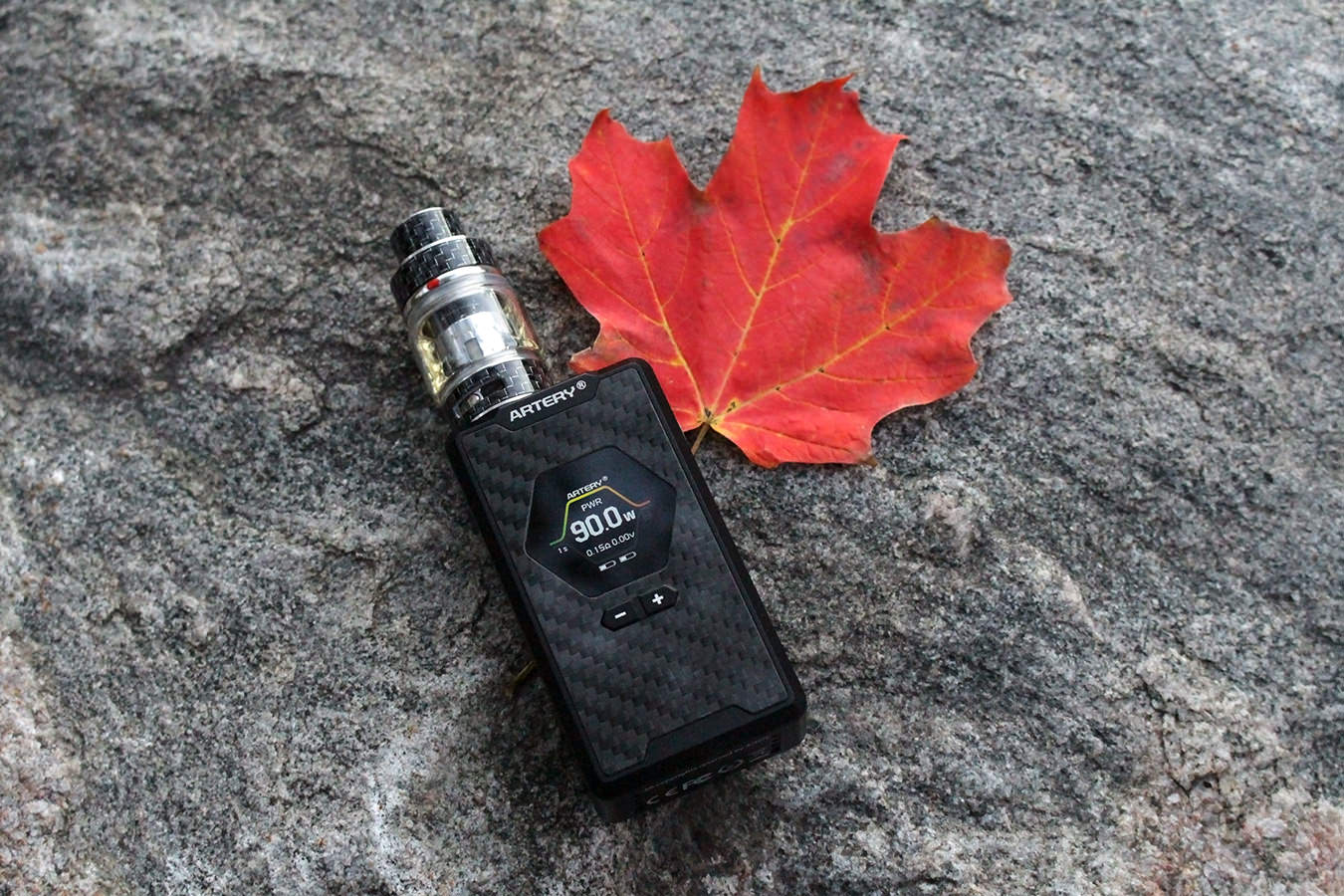