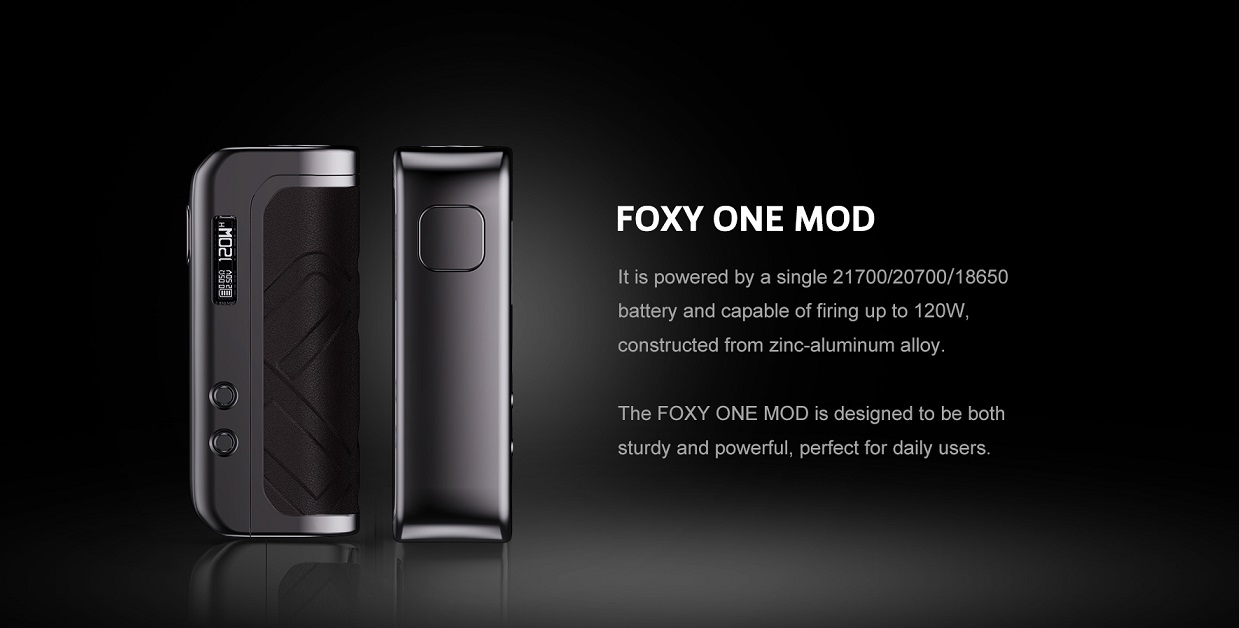 Over the last few years whether it be sub-ohm tanks, RDA's, RTA's AIO's or mods Augvape have released quality products that have been well received. When it comes to mods they have a reputation for concentration on simple power only devices that just perform very well and are stylish or offer something different in design.

The Foxy One is a power only single 21700 device which offers a max wattage of 120w or reduced to 80w when an 18650 instead is installed. The Foxy One is a very simple device with no bells and whistles features or extra settings offering just wattage, voltage and bypass modes. The device is one of the smallest single 21700 mods available which despite being reassuringly weighty due to it's solid build quality is still a device convenient for out and about use! 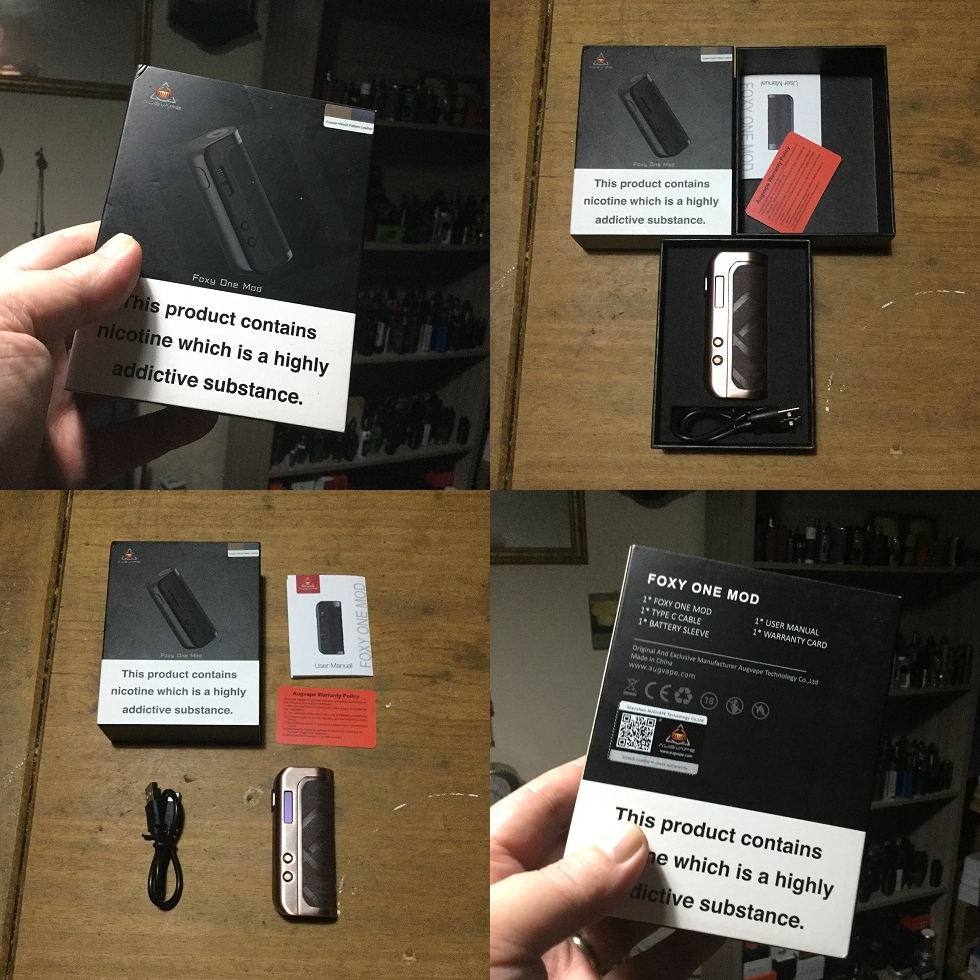 The Foxy one comes in simple cardboard box packaging with outer cardboard sleeve and on opening my eyes met a very Foxy looking tiny 21700 device lying in it's central compartment. The device is offered in various frame colours and textured spines, I received the Copper Wood Pattern Leather version which has a brushed Aged Copper C-frame with matching buttons and Wood Pattern Leather (effect i believe) spine which has just a slight springiness when pressed rather than being heavily cushioned, overall it's a looker and feels absolutely great in the hand! The options are Black Green Leather, Gunmetal Brown Leather, Gunmetal Alcantara, Copper Wood Pattern Leather or Silver Black Leather.

The plain face of the device has a large square protruding fire button towards the top which curves to the contour of the device, Both sides to the rear has the continuation of the spine section and towards the front on the frame one side see's towards the bottom a vertically positioned Type C USB port! The opposite side again on the front frame we have a small OLED Screen top and lined up vertically your 2 small round navigational buttons.

The spine of the device has the textured patterned spine of choice and moving up top set towards the rear we have a small 510 plate and Gold plated, spring loaded 510, the base of the device reveals safety marks and understated branding!

The whole Zinc Alloy device (including main material of spine) has a bit of weight to it but is small and very ergonomic both to just hold and fire! When it comes to build quality despite it's lower end price point it gets full marks! 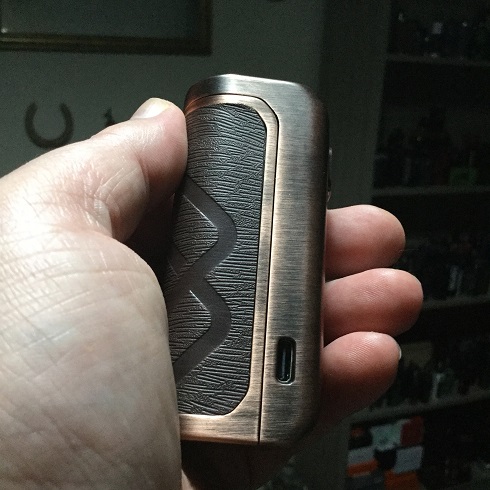 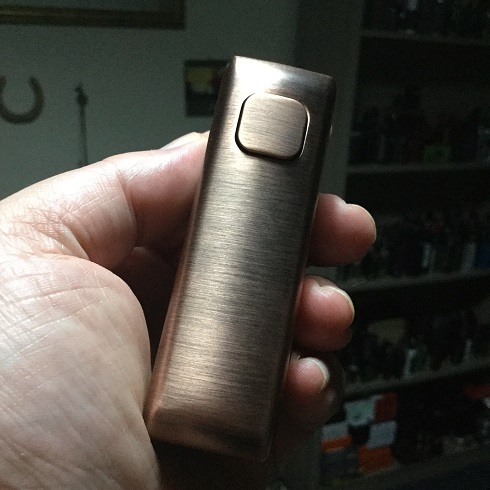 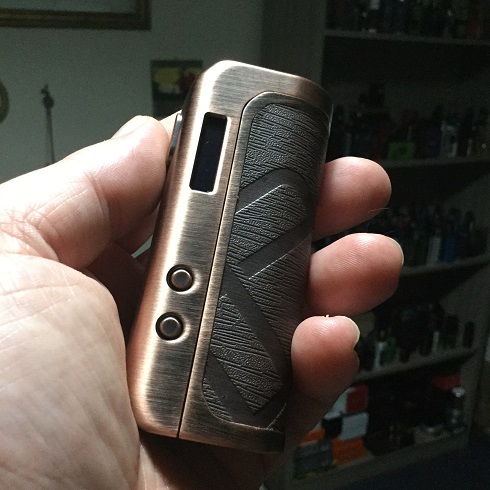 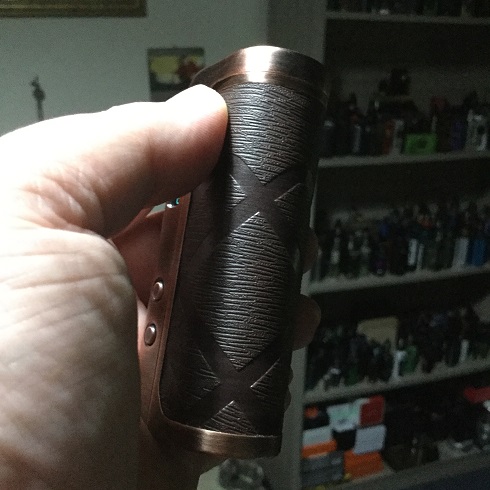 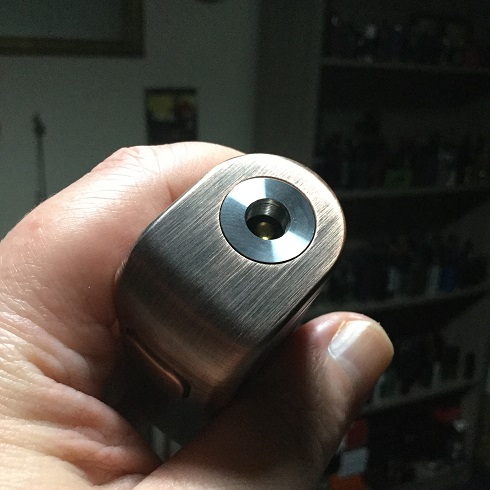 Size Comparison, Foxy One between two other single 21700 battery devices, the JellyBox Mini and Mirage! 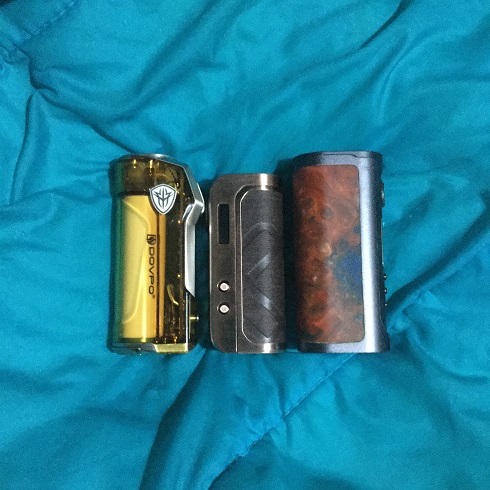 Foxy One Specs and Features: 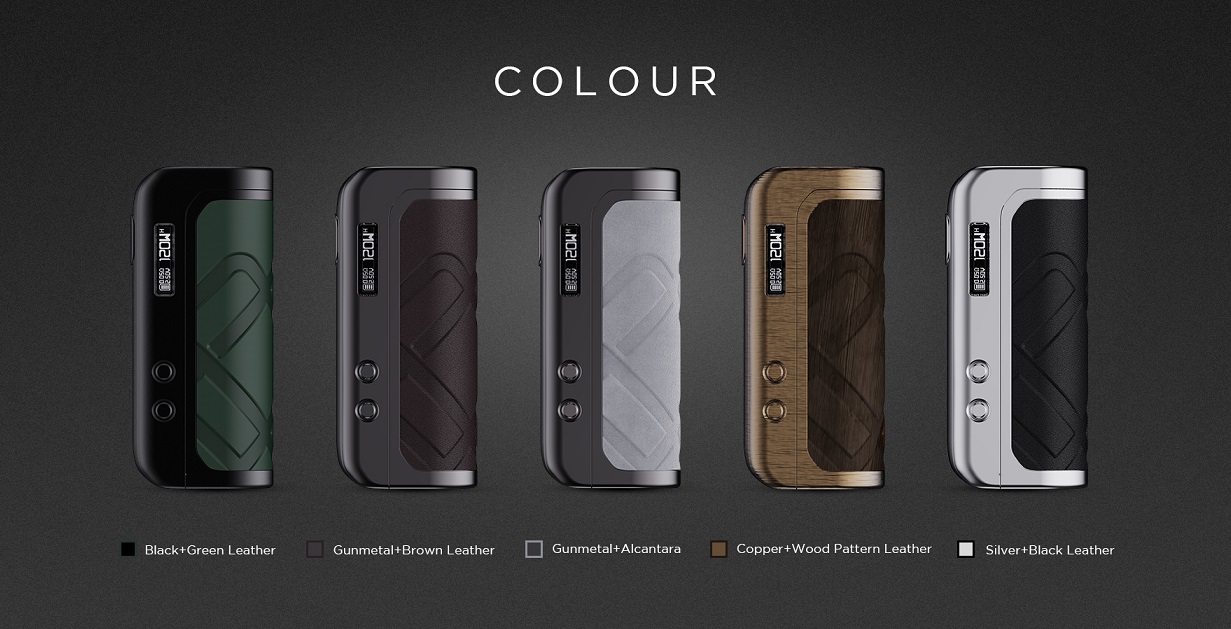 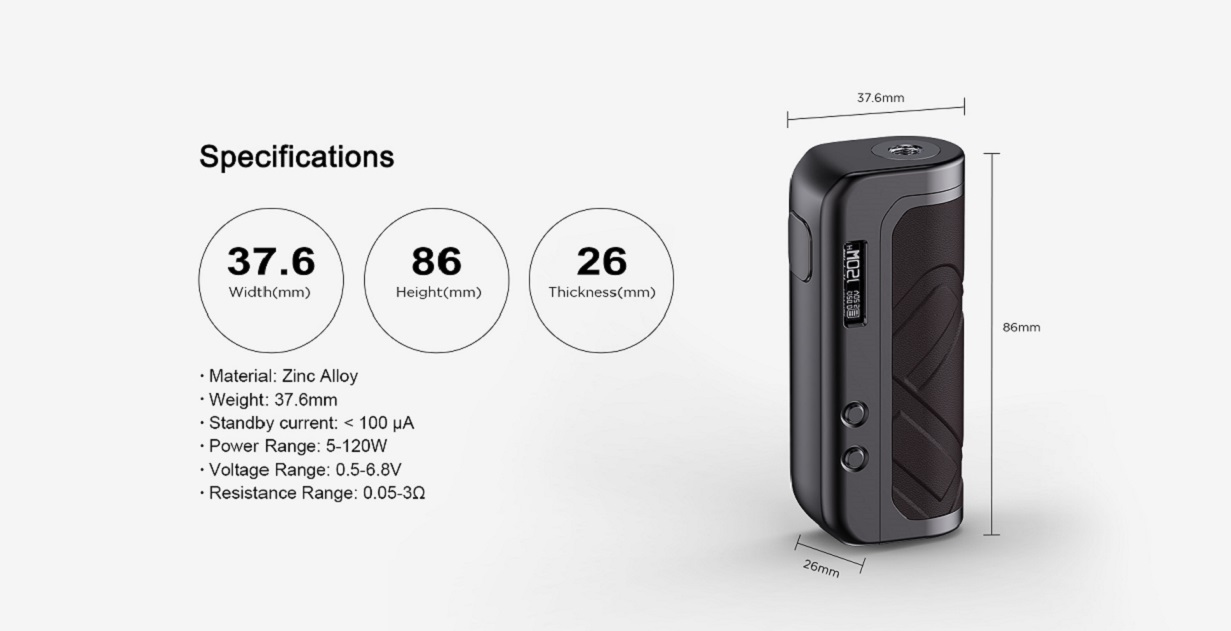 The device will accommodate either a 21700, 20700 or 18650 with the included adaptor although why anyone would use a 20700 is beyond me. The Foxy One has a classic C-frame with pull off spine for battery instalment and the first thing I like is beneath the covering the main material of the spine is the same Zinc Alloy used for the main chassis!

I also like that the battery door has protruding curved sections to the inner to form an incomplete tube which either your 21700 or 18650 (inside the adaptor) can slide into from above and then the whole spine with installed battery assembly just gets pushed onto the mod. The contacts have bevelled edging to prevent damaging your wraps and when it comes to removing your battery all you need to do is pull off the spine and there is your battery ready to slide out!

The edging of the spine has 3 large, very strong magnets and it precision fits with absolutely no movement whatsoever, likewise i have tried both 21700 and 18650 batteries and we get absolutely no battery rattle. Very impressive with the only slight con being that bug bare of battery orientation being Black on Black and needs to be more visible!

The Foxy One has an old school small (can you believe they actually call it large on their website!) screen with limited information but that's the point of most Augvape's devices they are kept simple and minimalistic when it comes to the display, even so the display is bright and despite the small font i had no issues reading the information and that's from someone who's wife keeps telling me I need to get to Specsavers to get my eyes tested!

On the left we have an horizontally positioned battery status bar and to the right of that at the top the resistance, below is the voltage which will display wattage when in either Voltage or Bypass Modes!

The right section of the screen is your selected wattage, voltage (when in voltage mode) or BP when in Bypass! 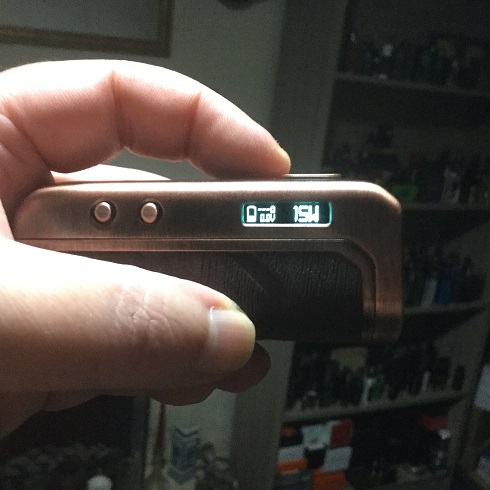 Operating The Foxy One

The Foxy One is the usual 5 clicks of the fire button to turn on and 5 clicks to turn off, once on pressing both navigational buttons together locks those buttons but the device will still fire.

The device has just 3 power modes but no advanced settings or TC functions and to change between modes is 3 quick presses of the fire button. So from wattage mode 3 quick presses takes you to voltage mode which can be adjusted between 0.5V up to 6.2V in 0.1V increments and it also round robins. A further 3 presses of the fire button takes you to Bypass mode where you get BP displayed where your set wattage or voltage normally would be and then below the resistance to the bottom right of the status bar it displays wattage output in real time which will all depend on your resistance and voltage left on your battery.

A further 3 presses of the fire button takes you back to wattage mode which adjusts from 5W to 120W in 1W increments at a rate of knots when the button is held down and round robins, however the device detects when the battery installed is an 18650 and only adjusts to 80W before going back to 5W, i do like this as there is no point setting wattage above 80w with an 18650 battery because it just isn't going to materialise! Any cons i have for this device are quite petty one being i wished at least for lower wattage the increments were 0.5w but not a deal breaker despite being a low wattage vaper!

That's it! as simple as it gets with the only other thing to mention is after switching the device off or changing battery the device remembers your previous setting which for me is a pro! 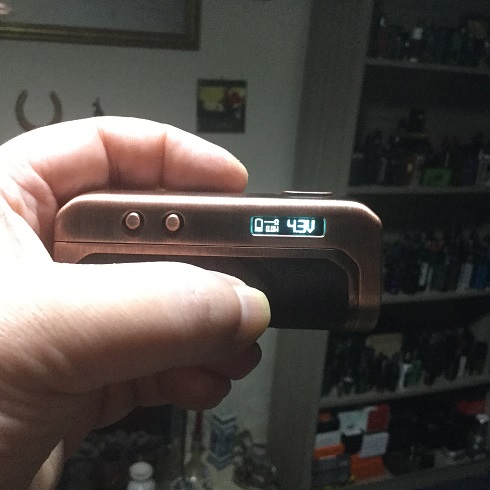 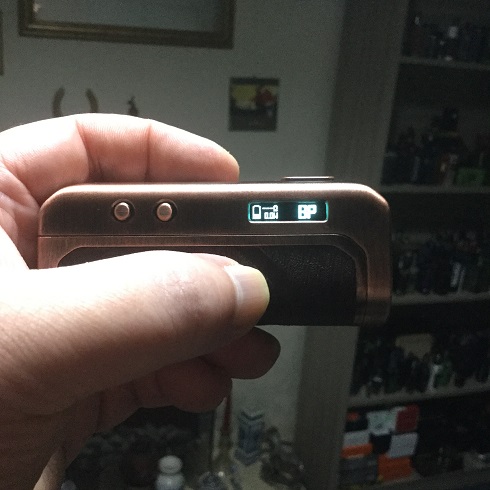 Of course the recommendation would be to charge your battery externally but if you need to charge in the device the Foxy One has a Type C USB connection and 1.2A charge rate which could be a little quicker but we have passthrough supported if you need a puff while you wait!

To start off i have to confess i actually chose both the device and colour to review based on liking the looks and also hearing on forums plenty of good things and absolutely nothing bad so unless something reared it's ugly head this was always going to be a positive review!

After saying that i was even more impressed than i expected especially around the build quality and just how small and ergonomically friendly the Foxy One actually is and when it came to choosing the colour it wasn't an easy choice as this comes in some very aesthetically pleasing options, Foxy by name, Foxy by nature!

I have been using this over the last few days both at home but it also made for a great out and about companion, comfortable to hold and fire and it just slips into the pocket when not in use. It fires with zero issues hitting set wattage instantly and performed like a trooper! The protruding large fire button is a joy and i can only describe it as having a luxurious stiff cushioned click, owners of the Foxy One will understand the description i'm sure!

The only petty cons i have is poorly marked battery orientation and i wish it adjusted in 0.5w increments especially up to 20w but anything else would defeat the whole object of what this device is meant for which is being a simple, user friendly, high performing power only single 21700 device so no TC or bells and whistles features but those that require them simply wouldn't buy this device so not an issue or should that be a non issue!

I have used both 22mm and 24mm up top and even with 24mm we have some spare real estate so 25mm and even 26mm would only go over the bevelled edging but not overhang the device itself so would anyone be wanting to fit over a 26mm tank on a single battery device, a rarity i would think!

I normally just write the review and put my likes and cons but don't go as far as recommending products but for those after a tiny single 21700 device for power only modes then you can't go wrong and you get the added bonus of excellent build quality and a really Foxy looking device! 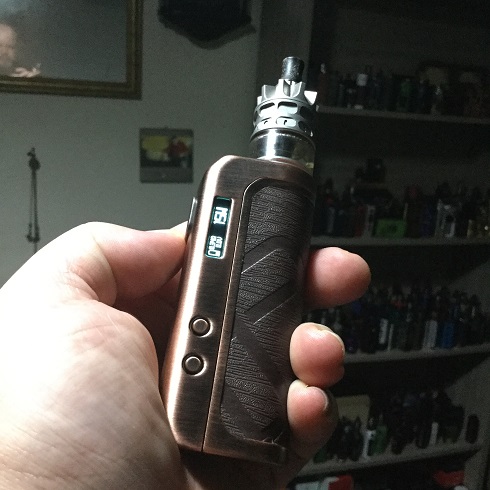 1W increment adjustments (0.5w up to 20w would be better)
Battery orientation Black on Black
If charging in device, has only average speed charge rate
Quite heavy (but small for me not a con at all)

Not a con because it's the point of the device but to clarify no bells and whistles features likes curves etc and no TC option!


I would once again like to thank Ella from Sourcemore for supplying the Augvape Foxy ONE 120W Box Mod for the purpose of this review, thanks for reading and stay safe!

Disclaimer: I am not affiliated with Sourcemore or benefit in any way from the use of the above code but was asked if i would include it in my content!