Could Covid be treated with nicotine? French researchers are trying to find out Could Covid be treated with nicotine? French researchers are trying to find out

In the first few months of the Covid pandemic, doctors treating patients around the world noticed that there were fewer smokers among their most serious cases. Some suggested the nicotine in cigarettes… 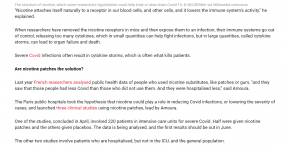 I just saw some half assed "public health" twitter account from the Midwest say that smoking was killing people with Covid so you needed to quit right away... in the middle of a Covid pandemic.
Nicotine withdrawal sounds like a really stupid idea right now if nicotine is helping people not die of covid.

Wouldn't it be fun if some smoker in the US who is rich enough decided to get creative and sued one of these agencies?
The "If you were honest and I switched to vaping I wouldn't be dying right now" defense.
We are an extremely sue happy country.
Think about it this way
People have sued red bull for not growing wings... and WON 13 million!!!
So I guess anything is possible.

Gold Contributor
Member For 5 Years
VU Patreon
I think all ex smokers should put together a class action suit to recover our share of the MSA money...

The links to the studies and press releases are in there.
it's a great link for anyone who wants to look deeper into this.

ajvapes said:
I think all ex smokers should put together a class action suit to recover our share of the MSA money...
Click to expand...

That's the thing.
The MSA was created because individuals were starting to win multi million dollar cases against the tobacco companies.
Big Tobacco knew they didn't have a million dollars for every smoker so they worked in conjunction with the government to create a scheme where smokers could no loner sue the tobacco companies.
Instead they would provide the Government with a bunch of money to dole out as it sees fit to cover smoking related healthcare costs and youth prevention campaigns.

like 80% of the money is used on non tobacco related shit
Some states are really bad. So bad that 95% of the money goes to where it was never supposed to go.
Then there are the bonds.

Some states owe more money on the bonds each year than the tobacco money brings in. so they raise taxes on the poor to pay for their fuck ups.

You're right. Someone should sue them for this.

Gold Contributor
Member For 5 Years
VU Patreon
Exactly , much of the money goes to ANTZ and advertising agencies, Pretty sure Marvel Entertainment had a windfall.

VU Donator
Gold Contributor
Member For 3 Years
ECF Refugee
Reddit Exile
VU SWAT
If they wanted to stop people from smoking it seems letting Big Tobacco be sued out of existence would work. Instead our “leaders” decide to bail them out, to big to fail no doubt. The hypocrisy our representatives in government display on the daily is really disturbing.

ajvapes said:
Exactly , much of the money goes to ANTZ and advertising agencies, Pretty sure Marvel Entertainment had a windfall.
Click to expand...