This is going to be very much a two-part review, as the Drag 3 and TPP Tank are available together as a kit, or separately. This will mean that this review is a little long winded, feel free to scroll straight to the Pros/Cons and conclusion if you don’t need the details.

Compared to the Drag 1 and 2, the Drag 3 has a far more subtle design in line with the rest of the current Drag range, it still has a huge drag logo on the side, but this time it’s embossed leather so (at least with my black/black version) it’s far less prominent. From the front, it’s the same setup as the Drag X, with identical buttons/button positioning.

On the subject of batteries, one set of my 18650s didn’t fit – these batteries fit in every other mod of mine and every other battery of mine fits in the Drag 3 without issues.

According to the specs on Voopoo’s website, the Drag 3 is 25mm wide – this I assume is including the small step on each side of the mod – in reality 24.5mm is as far as you will get without overhang.

The 510 is slightly raised, which I guess protects the paint on the top of the mod but it does result in a small gap – it not really noticeable unless you’re looking for it, but you still know it’s there.

Like the rest of the Drag range, the Drag 3 has two/three modes:

The screen is clear, which is fortunate because there’s a lot going on there.

Battery displayed as two bars (well done, this is good), mode, power, puff counter, ohms, voltage, puff time and something called “gene fan” which Voopoo state “can calculate by simulating the amount of vaping per mouth cigarette through simulation to display the corresponding graph.” – I guess this is the new toned-down version of the Drag X’s score mode.

There are also two different display modes – Iron and Core – Iron is standard and while Core is quite attractive, it’s almost unreadable unless your mod is lying down. 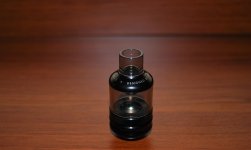 The TPP tank is basically the bigger version of Voopoo’s PnP tank – it is physically compatible with all the Drag and Argus mods that come with the PnP, however the coils are not compatible, when bought with the Drag 3 or separately, it comes with a 510 adapter with airflow control, so it will work on a 510 mod.

I don’t really like the aesthetics of the TPP Tank, it looks like a tank that is trying hard to keep some elements of a pod, which doesn’t really work. I’d have much rather seen it look like a regular stock-coil tank.

Overall, the TPP tank is great – because of its coils. I’d love to see a regular sub-ohm tank using these coils – forget the magnetic fitting, give it top-fill, use regular size/non-O-ring 810 drip-tips and you’d have a perfect tank. 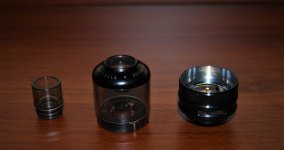 Ratings as compared to similar devices.

The Drag 3 is a nice, compact and attractive mod – it does almost everything I want from a dual 18650 mod.

The TPP tank performs really well, most of my issues with it are due to my own styling preferences and most importantly the coils are great.

Buying just the Drag 3, just the TPP tank or the Drag 3 kit are all solid choices.