The original single coil Zeus RTA was released almost 2 years ago and as someone who prefers single coil RTA's and has a real hate for leaking tanks it's still the atty i use by choice more than any other. After 3 Zeus RTA's bringing bags of flavour to top to bottom airflow designs the Zeus X even as far as Geekvape were concerned should of been the final member of the Zeus family. But here we have the Zeus Subohm tank with a very familiar Zeus look (almost identical to the Zeus X) using the same top to bottom airflow concept and accommodating plug in style mesh coils. I don't usually get over excited by subohm tanks but this is a Zeus! so very eager to give it a good look! 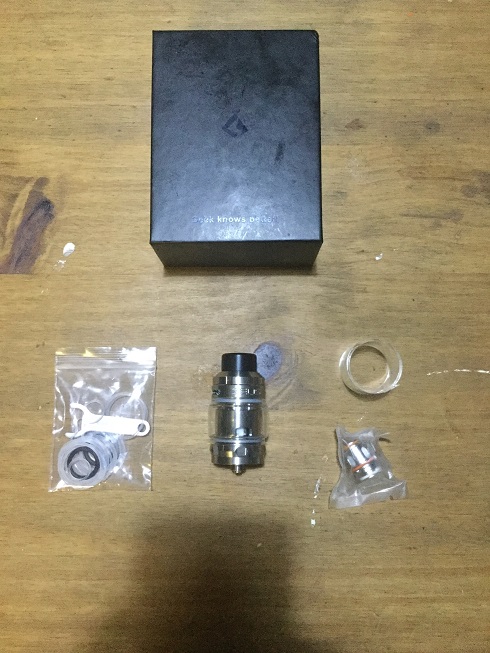 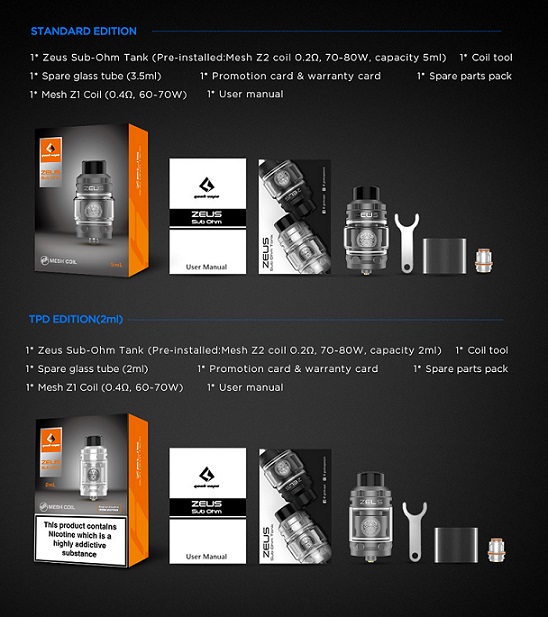 The Zeus Subohm Tank came in the usual plain Black sturdy cardboard box that Geekvape samples tend to come in, with listed contents and specs on the back of the box. I received the Stainless Steel version, it's also available in Gunmetal, Black, Red, Blue, Gold and Rainbow, up top we have a Black Delrin wide bore drip tip on all versions. The tank is 25mm at the base but tapers outwards so the top section is 26mm and the bulge glass (standard edition) increases it's overall diameter, pretty much the same dimensions as the Zeus X RTA and very similar looking. It very much has that Zeus look to it with the Zeus logo visible on both sides of the chamber (also 2 large wicking holes on the chamber are visible) and "ZEUS" carved onto the airflow control ring front and back. The airflow control ring has large dual cyclops and both base section and top-cap has matching grooved texturing for grip, the top-cap then tapers smoothly inwards to meet the 810 Black delrin drip tip. The base has all the usual etched branding and safety marks and the Gold plated 510 protrudes quite a way. Nothing at all to complain about with the build quality it's the same standard as the other Zeus family members. 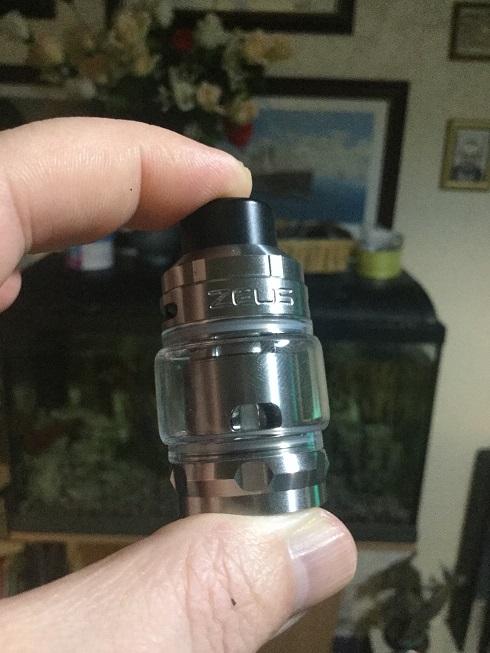 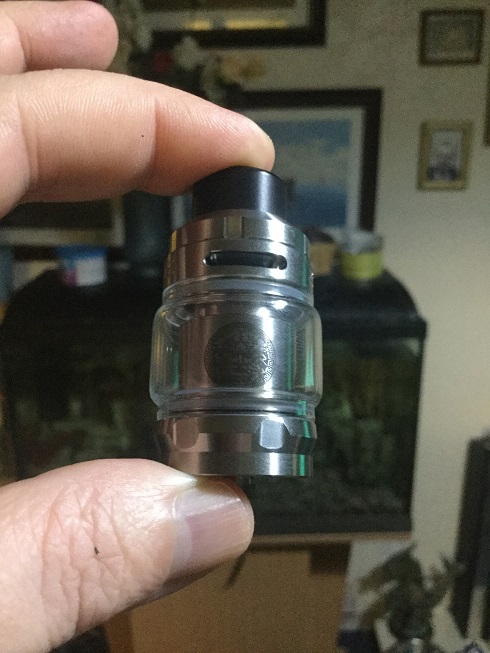 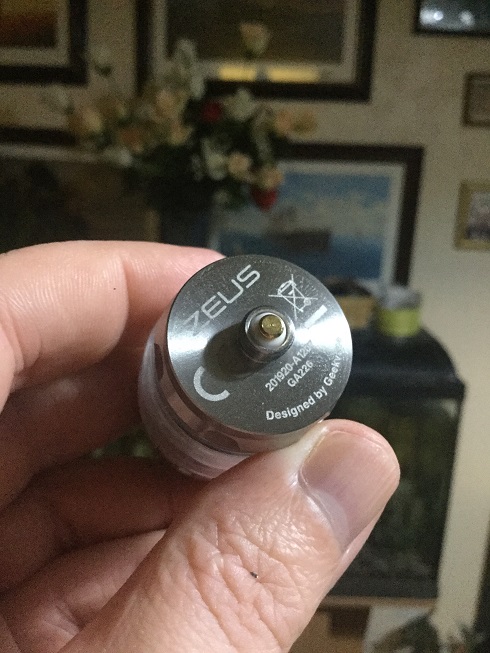 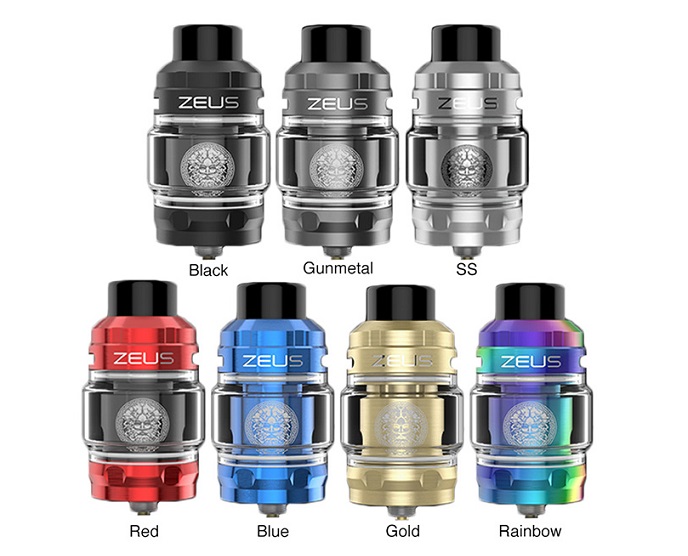 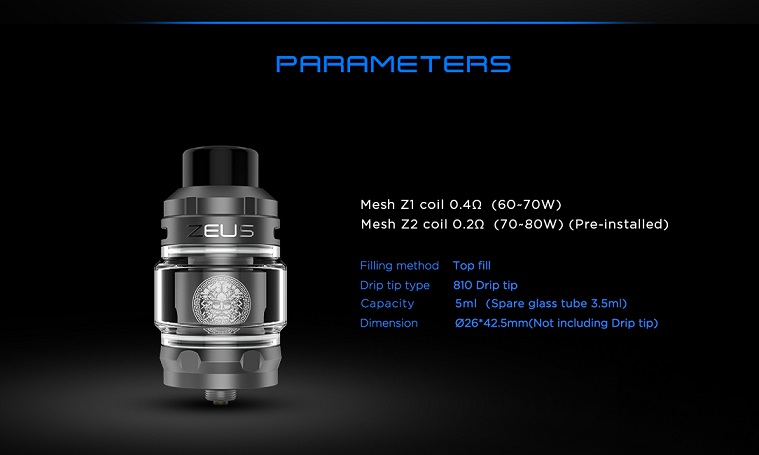 Starting at the top we have a wide bore goon fit delrin 810 drip tip which can be swapped for one of your own if you prefer, no second option or 510 adaptor is provided unless it's included with the retail version but the pre-installed 810 i have no issues with. The top-cap screws off (the usual bayonet design so just a slight turn needed) as does the base section. The glass can be wiggled free as it's secured top and bottom with o-rings and can be replaced with the straight 3.5ml glass (the TPD version comes with 2ml glass only but you do get a spare). The airflow control ring can also be easily removed which leaves the juice port and airflow intake section with attached double walled chamber. The coils get press fitted into the chamber and the base section has a positive plate for the bottom of the coil to make contact with. We get all the usual spare o-rings and also a coil removal tool which is a nice touch but personally i didn't find any need for it. 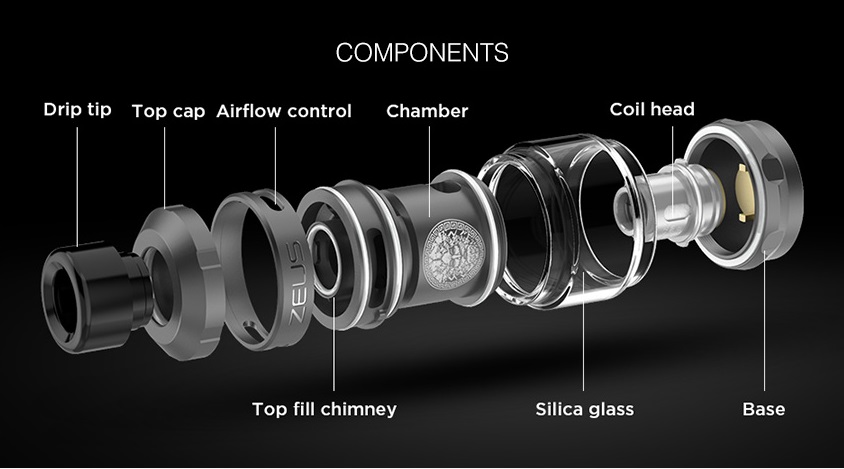 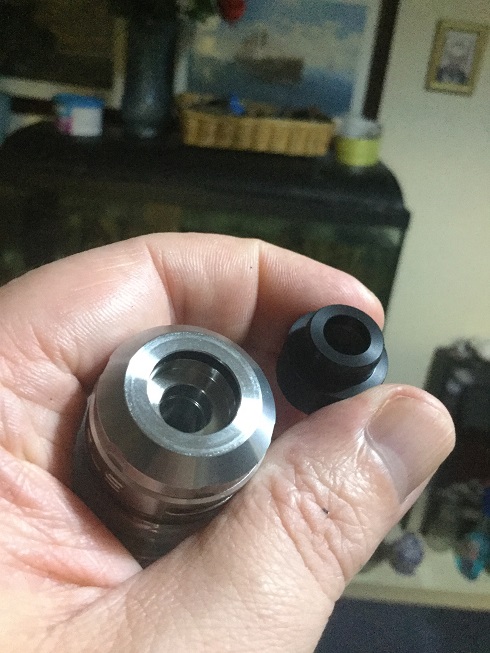 The Zeus Subohm Tank has a top to bottom airflow system with large dual airflow slots that are fully adjustable. You also have an double walled chamber so the air comes in through the slots, down the cavity between the two chamber walls and into the base section. Now we have the air in the base section just as you would if the tank had bottom airflow slots and this air enters the coil head from underneath in the usual manner giving bottom airflow, it's just taking the top to bottom airflow concept of the Zeus RTA's and implementing it in the least complicated way. I don't like to say leakproof but the system gives the Zeus Subohm tank the same leak resistance that we have seen with the Zeus RTA's. 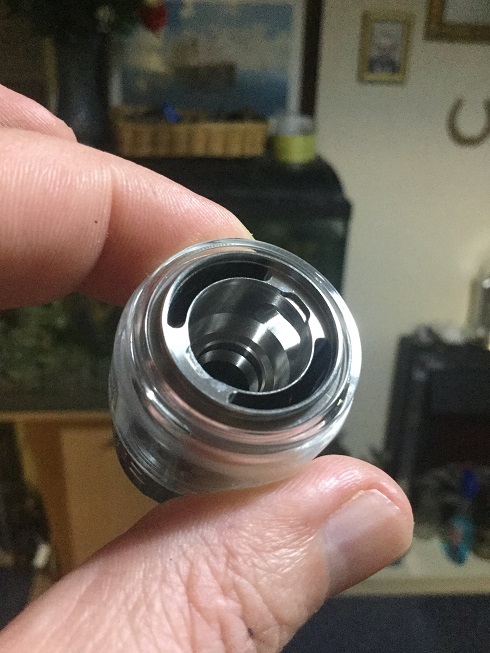 The Coils and Fitting Them

The Zeus Subohm tank has 2 available coils which are both kanthal mesh and included. Pre-installed we have the Z2 0.2ohm mesh coil head which is rated between 70-80W. The other included coil is the Z1 0.4ohm coil head which has a rating between 60-70W, the specs are etched onto the coil head shell.
The mesh is more of a Notch style giving plenty of surface area with large gaps between so wicking will be no issue as was once the case with the first generation notch style designs, the coils also have 4 very large wicking holes.
The coil head simply gets press fitted into the chamber and pulled out to remove, if you have any problems pulling the coil head out you do receive a tool to help but i have had no issues. Looking on the chamber we can see 2 large wicking ports to allow e-liquid to surround the coil head as the chambers main purpose was to deliver airflow from the top to the bottom and having plug in coils is cleverly taking advantage of having the chamber present. 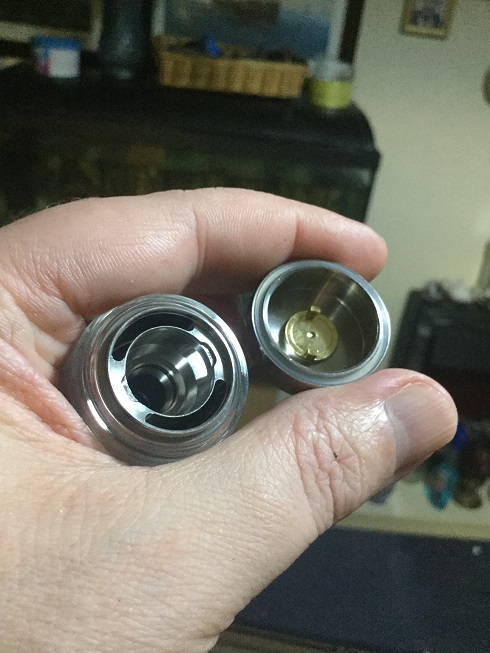 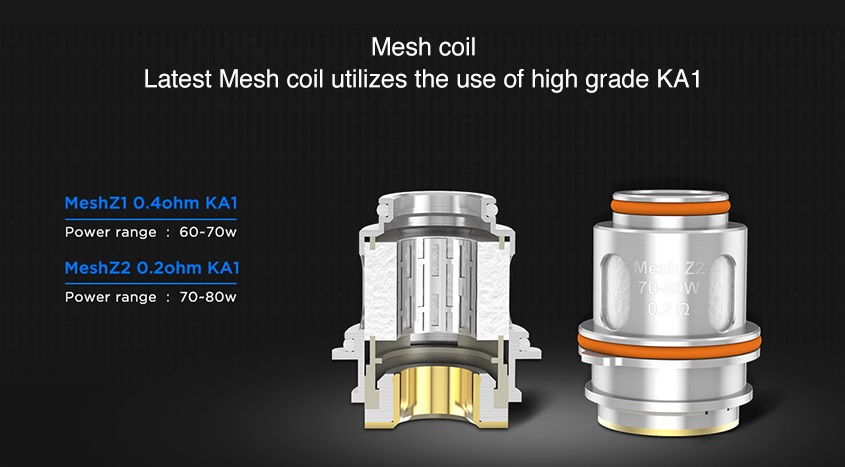 I need to be picky with the Zeus Subohm tank to find cons so here'e one, and that's the airflow control ring is loose. It actually turns nicely with stoppers and i have no issues with it's operation but when removing the top-cap sometimes the control ring also jumps off the tank, it's nothing major and mine is a sample version.
The top-cap is less than half a turn and it's off, it's the same bayonet design Geekvape have used on previously Zeus atty's. Once off the 2 kidney shaped fill ports are revealed which are quite narrow so large nozzles and glass droppers won't fit but most standard nozzles will be fine. Luckily there is quite a deep channel between the edge of the tank and air pipe section so it won't be messy if using larger nozzles, as any juice will gather in the channel and find it's way into the ports. Once filled just position the bayonet tabs in place push down and give it a slight turn. 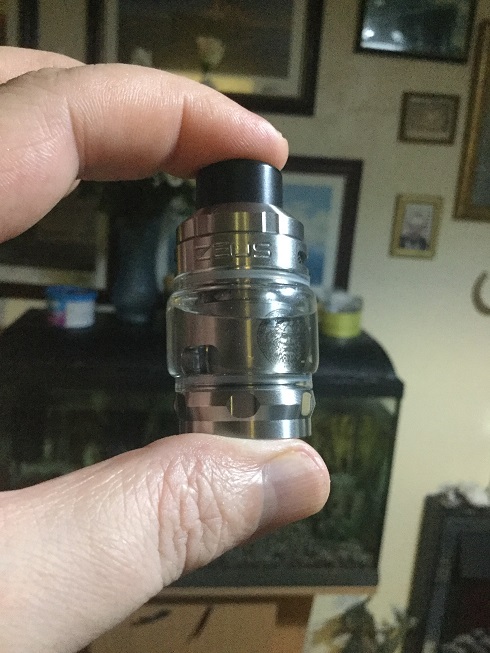 The Zeus Subohm Tank hasn't tarnished the Zeus name at all as this is right up there with the best subohm tanks available. Like the Zeus X the Subohm tank version gives bags of air and i have to agree with the the coils ratings with airflow fully open which gave decent flavour and copious vapor with both coils.
Much preferring a more restrictive vape i needed the airflow only a third open for the restriction i like and found with more restriction came even more flavour (again with both coils) very similar to what i get from the Freemax Fireluke 2, with no experimental wicking material on show i can only put it down to the large surface area with the design of the Geekvape Z coils.
Apart from finding the 0.4ohm Z1 better at lower wattage than the 0.2ohm Z2 i really found very little difference between the 2 coils. With the restriction i like the 0.2ohm Z2 coil i found best at 60W and the 0.4ohm Z1 coil at 45W both below the coils ratings but that suited me fine and much more efficient on battery life, i must say the airflow is noticeably smooth throughout. The 5ml capacity (standard version) is decent but just like the Zeus RTA's this tank ploughs through the juice but all that vapor is giving bags of flavour, the gap in flavour between subohm tanks (the best ones) and both RTA's and RDA's you can get a thin piece of paper between they have improved that much over the last 18 months.
I got sent the Zeus Subohm Tank the same time as the Bident which i reviewed a couple of weeks ago and it has been in use ever since it's arrival, it's long gone past with both coils what i would consider acceptable (average longevity), both coils are still banging out flavour and have plenty of life left, Cracking Subohm Tank! 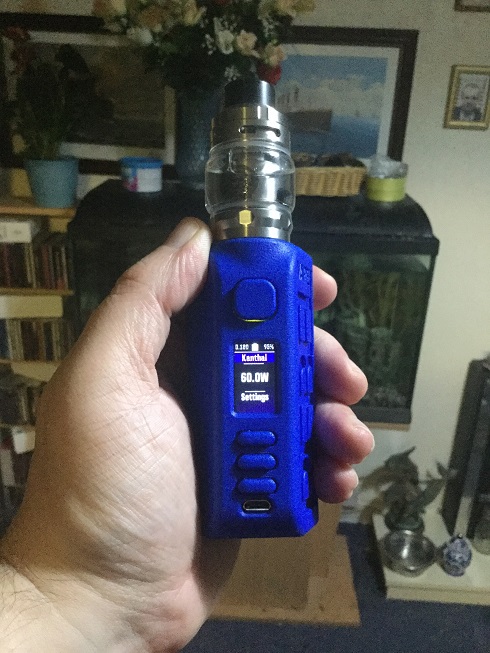 I would once again like to thank Carrie from Geekvape for supplying the Zeus Subohm tank for the purpose of this review.