Hello everyone and welcome to another review. Today I will be going over the X-Class by Yihi SX Mini. This device is something rather unique to the market. It is a full-size, auto squonking mod. It features a pump which sends liquid up to your atomizer, and packs in all of the features that Yihi typically does and then some. The mod is a big one, measuring in at 95.5mm tall and 57mm wide, with a top plate large enough to handle atomizers just a hair over 30mm. It is powered by dual 18650 batteries, has a 4mL bottle assembly, and has a max output of 200w. This has been out for a while, but the version I have has been worked on by Yihi to work out some of the bugs of the early release. Let’s get right to it eh?


DISCLAIMER: This device was sent to my by Yihi SXmini for review.


Available in Black and Gunmetal 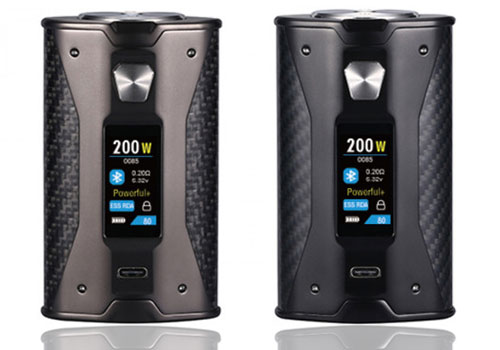 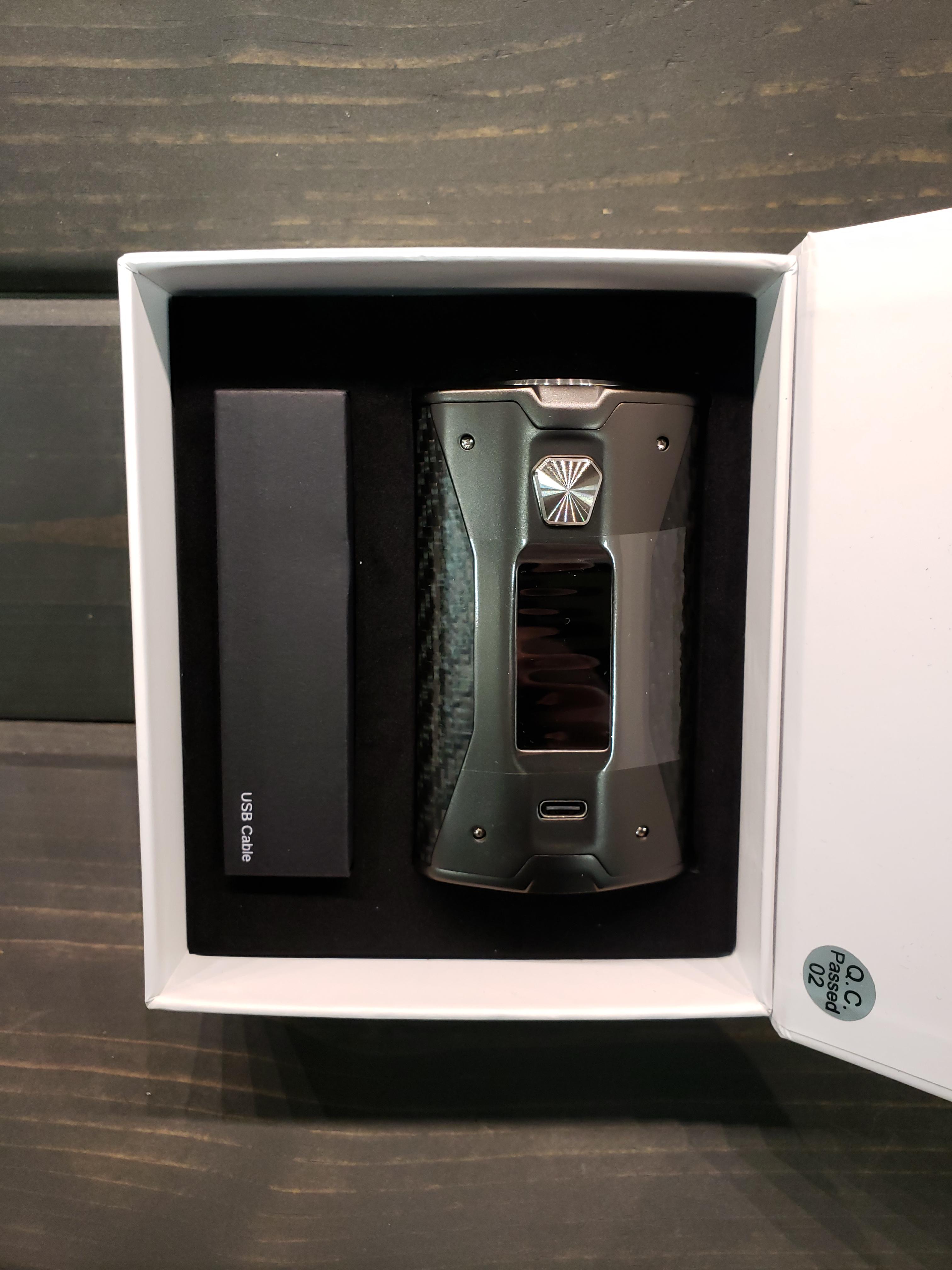 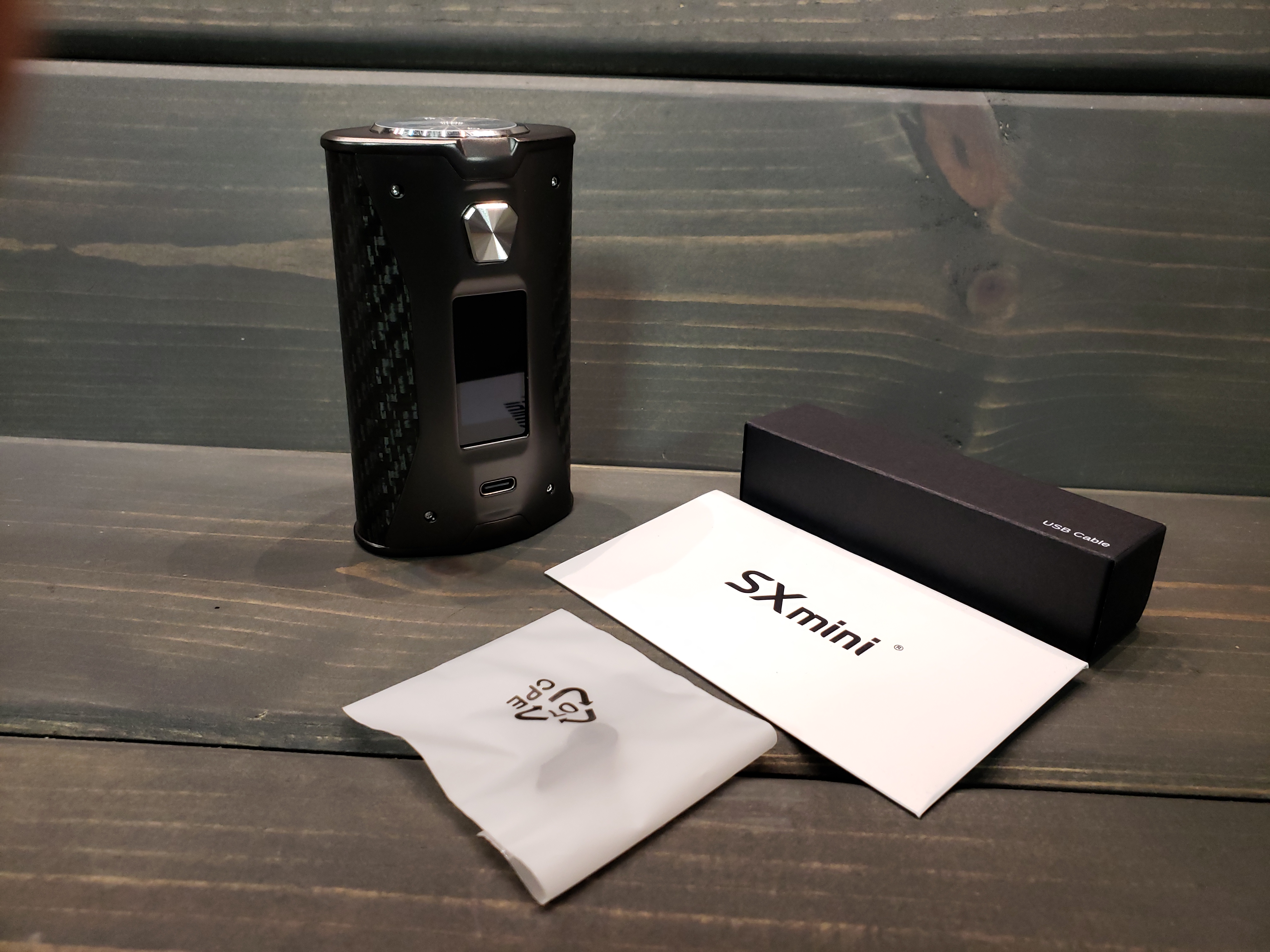 Operating Modes: Power mode w/ multiple preheat settings, temp control, and several Yihi preset modes (not getting into all of them)

Damn! This is one of the prettiest devices I have ever had in for review. The finish, the feel, and the overall quality is immaculate. There isn’t a damn thing wrong with this functionally or cosmetically. Out of the box, you will find a large device, with some weight to it. FIll up the bottle, and toss in two batteries, and it gets even heavier. HOWEVER, this isn’t as massive as I thought it would be. It is a chunky monkey, but it feels so great in my hands that I instantly forgive it for the lack of diet. In fact, the overall size of it is a little narrower than the Wotofo Dyadic, and the weight is that of a Rage squonker (maybe less). Getting more in depth and I found that the battery door is a nice, solid bottom hinge with slide latch, similar to what they did on the G class. The squonk bottle is also held firmly in place, and it just pops down and pulls out. Once the thing is powered up you are greeted with a lengthy SXmini screen, and then it shows you the very clear, and large touch screen. The touch screen is sensitive to the touch and never failed me once. I saw some early release videos of the screen wigging out or not working for some, but that was not an issue for me. It is just as responsive as a smart phone and works well even for hitting small portions on the display. Based on the startup and just getting it in my hand, I could not wait to start testing.

I am going to attempt to write this as simply as I can, but it has a TON of features to go through.

The menu is easily navigated by swiping through and clicking. There are back arrows to go back and pressing the fire button at any time will exit and go back to run mode. Now on to some on screen shortcuts. When in the running mode, the screen is locked and the only thing you can do without unlocking is swiping down from the top. This enters a sub menu. To cycle through these screens, you keep swiping down from the top and hit fire to Exit. They go as follows.


You can unlock the screen by swiping up on the lock symbol in the lower right corner and then click around on the screen for adjusting settings here and there as well. It is really hard to explain all of these things but the book does a good job of showing these settings. Once I used this thing for a while it actually was pretty simple and I found that the touch screen made it one of the easier Yihi chipsets to navigate. I never really liked how they did the joystick thing on the G class and I found that many of the button clicks didn’t feel natural. This is as simple as a few clicks and swipes and you are off and running. Not bad, and has a TON of features to play with. A fiddler’s dream if you will.

I want to touch lightly on the Divine RDA they sent me. This is a run of the mill, bottom airflow, Velocity-ish deck atomizer. Flavor is not awful from it, but it is a bit crude. It also looks REALLY goofy on top of this mod because it is so small in comparison to the 510 plate of the X-class. I used this for a day and swapped it out for something I actually wanted to vape on top. It isn’t a bad RDA for a new builder, but it is very dated. Also, if you don’t have the auto-squonking dialed in, you can over squonk and piss juice out the bottom airflow. 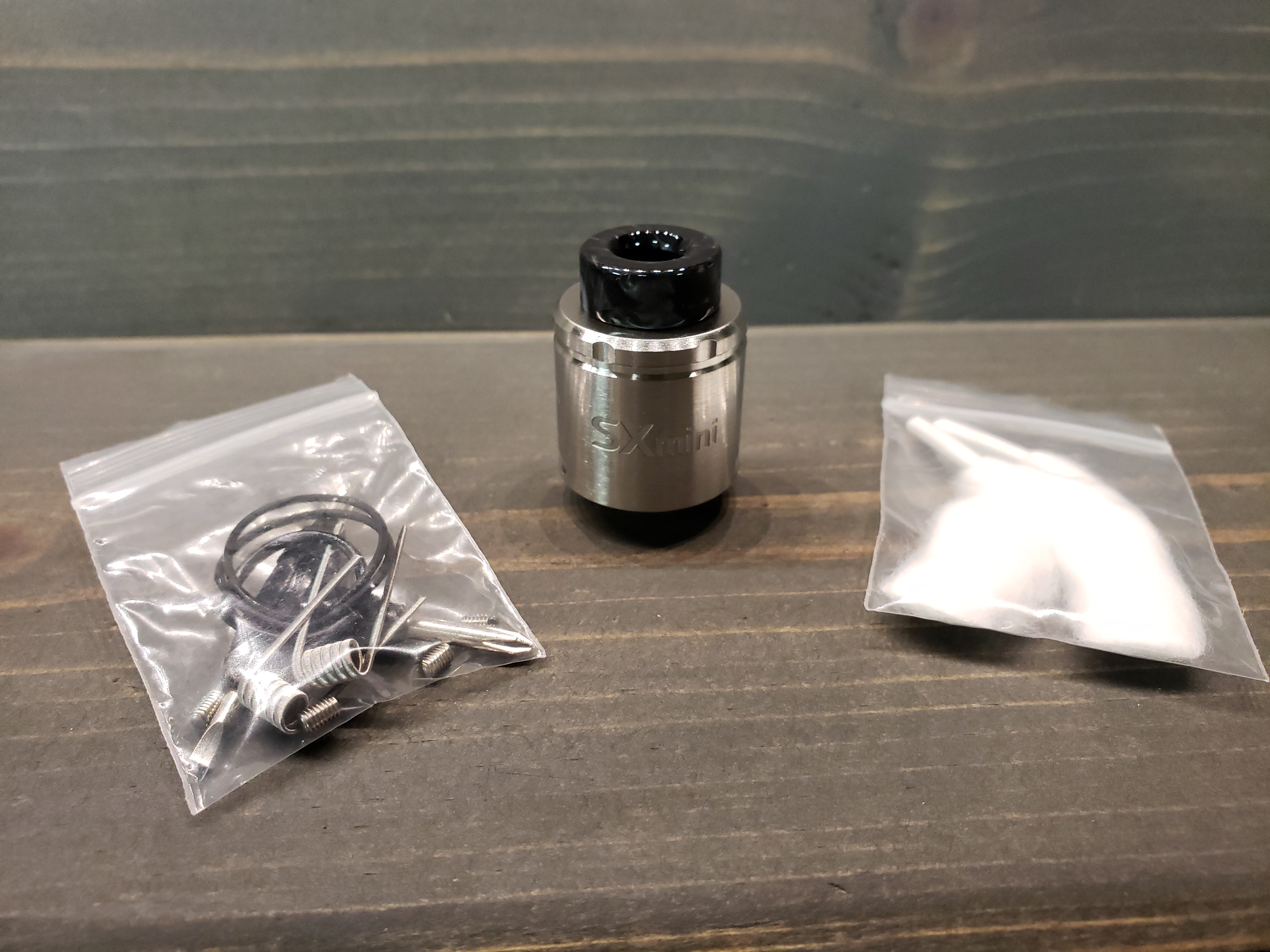 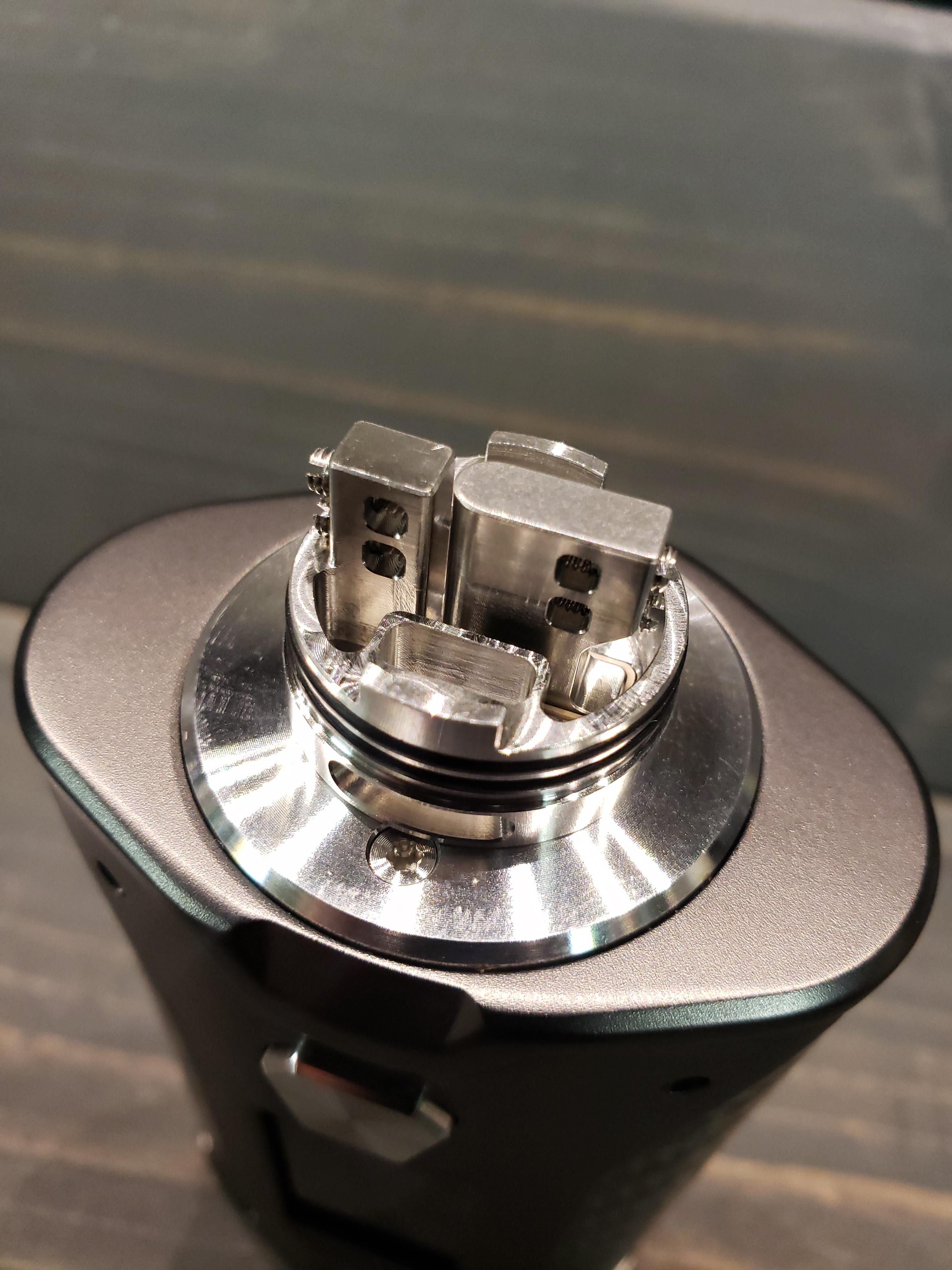 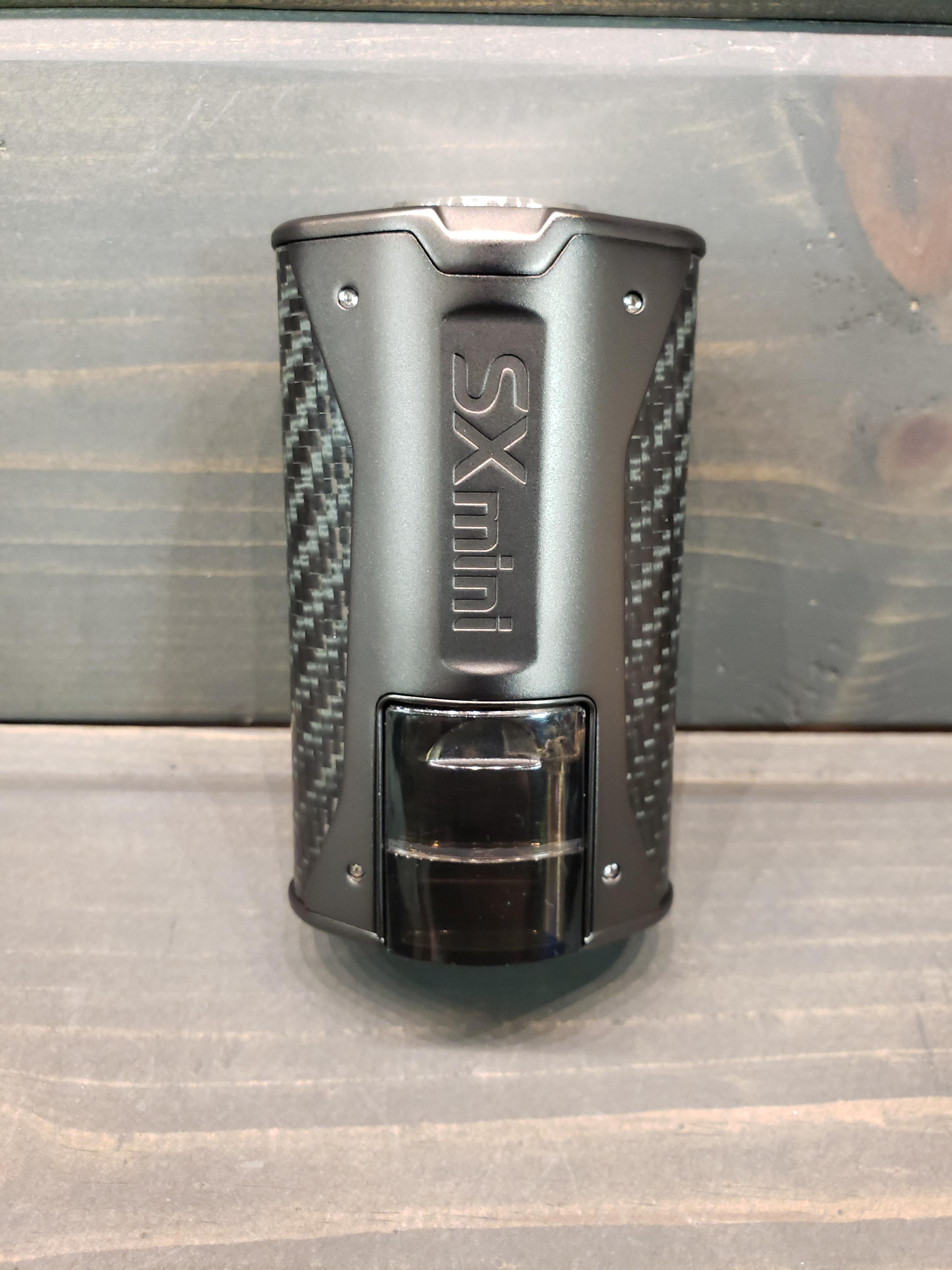 HOW IT VAPES / FINAL THOUGHTS


Alright, so with all these features, how does it vape? As a mod by itself, it works well. It has the same performance I get from something like the G-class. With some tinkering it provides tons of power and also has a top notch temp control, but it takes some time to get it where you want it. The menu system is pretty simple once you get used to it and the touch screen makes it much easier as well. The biggest question is probably going to be about it’s main feature, auto-squonking. It took me quite a while to dial it in, and I found that the build and wattage greatly altered where you set the pump to. With an 80w, low build, I ran the pump at the max of 100. With a less wild build and 65w, I ran the pump around 70. With the pump setup right, it left liquid in the bottom of my atomizers, which then would wick up with ease. I did find that if I was taking a lot of consecutive rips off this, it would get behind and I would do a quick swipe down and manual pump to basically flood my deck out to catch back up. Not ideal for something I expected to be automatic, but I think it is almost expected for the first of its kind. The pump has a noticeable sound to it, almost like turning on an electric razor, but it isn’t all that annoying really. Overall, there were just a few things that bugged me about this device. The worst part of it is the small capacity. At just 4mL, you will be forced to refill a few times a day. The second con is that I don’t ever see their pump system keeping up for people who like to vape at 100+ watts. Another con is the battery drain, as this will show half battery, but not be enough to fire a build and pump at the same time. Sure, the batteries got me through a full workday, but it was close. The last con is just the learning curve. I strongly suggest reading the manual right away. This isn’t a mod you will grab and be able to use well out of the box. It takes some time, but like I have said a few times, it all starts to feel more natural and it isn’t all that bad.


Overall, the people I see getting the most out of this are those who like to tinker. It is super innovative and fun to use. I really enjoyed using it and it is just really cool and unique. It has a lot of good going for it, with just a few things I feel Yihi might want to work on.

OVEN TEST – If this were to accidentally fall into the pizza oven, would I go out and get another? I don’t think I would rush out to snag one, but I will enjoy the one I’ve got for the time being!

Thank you everyone and thank you to Yihi SX Mini for sending this my way for review. I am seeing these online for about $200-220.

REVIEW CRITERIA: I use each item for about two weeks to ensure I have collected enough data to adequately write a review. I use the same e liquid in tanks or rdas throughout all my reviews to ensure that I am comparing apples to apples between all modern equipment. I do not post reviews until I feel confident that I have used it enough to give an educated review. The reason I started doing reviews was due to poor purchasing decisions in my vaping infancy about two years ago. Back then, I purchased several different pieces of hardware without really enjoying it and I hope my reviews can guide people into spending their hard-earned money more wisely than I did! ****Keep in mind that some items I receive may be pre-release and not in retail packaging. Quality may be less than the finished product and what is in the package may differ from the retail package as well.