Silver Contributor
Member For 4 Years
Unlisted Vendor
I'm just gonna put this out there.....I have never been a fan of the label 'e-cigarette'

For someone as deep in the rabbit hole as myself then words like 'smoke'....'cigarette'.....'cig'.....are words of blasphemy, anything that links what we do now with what the vast majority of us did back then grates on me like nails on a chalk board...I hate it...that being said it's admittedly easier to say than 'nicotine delivery device' but still.....it's not a fucking cigarette....and when someone says to me...(like recently)..."oh you smoke an e-cigarette?"......in my mind I slap you shitless....because....well...that's legal...

And when I see the word 'Cig'....being 'fluffed up' by pairing it with a lovable word like 'Pet' ...well.....who's ever idea that was deserves to stand there and slap themselves silly .....repeatedly....for several days...while I watch.

Cigpet indeed.....stick a question mark after it and it sounds like your being offered a smoke from one of the cast of Geordie Shore...

And how are we all my lovely foggy and fine smelling soirée, back again with more of the same.....seriously...I have a catchphrase and everything now (bell end).....Today's offering comes courtesy of my very friendly ...erm...friends (?) at Heavengifts and is manufactured by another of Shenzhen's old skool vape jedi's... iJoy.....well....an iJoy spin off shall we say, the annoyingly named Cigpet.

Cigpet seem to have a more aesthetic approach to their vape gear and who can blame them, 9 times out of ten we all personalise our gear anyways so they've cut out the middle man and made their latest offerings more up to date with current trends, and on this occasion they have adorned their latest RDA with a pretty little hat...I give you....The Cigpet ECO RDA 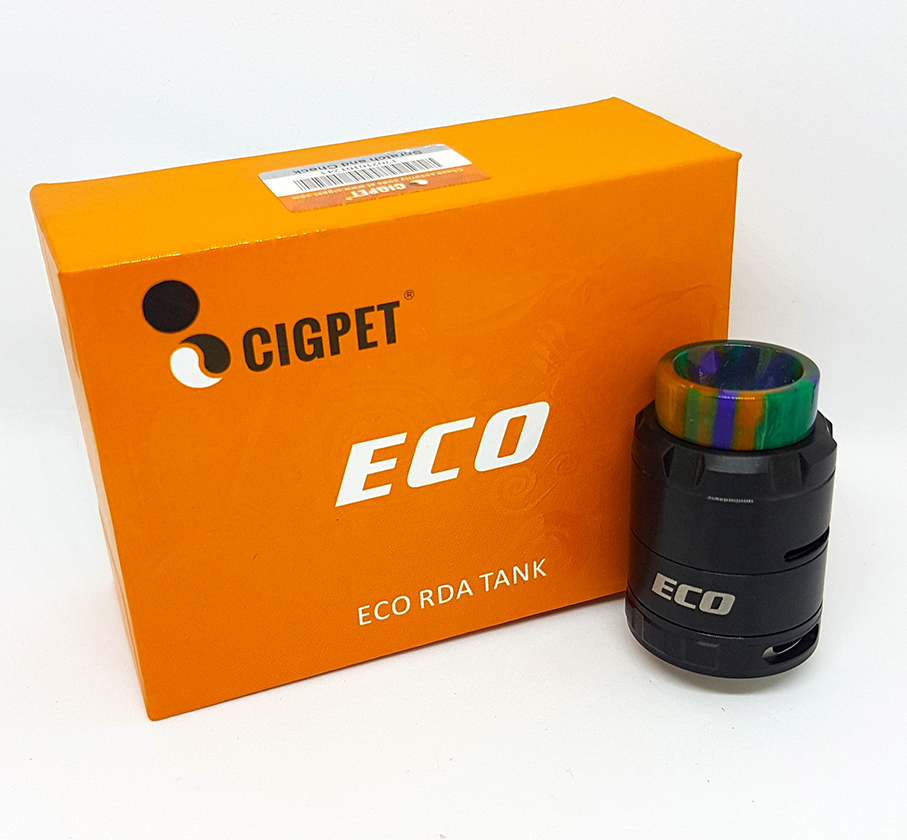 Them...that's who...you just know that whoever took that video got mauled to death seconds after...

The Cigpet ECO is a robust over-engineered 24mm RDA with more options than you can shake a shitty stick at, I mean they really went all out on this one, adjustable air flow from underneath and on both sides, a 2ml juice well and the deck itself offers a duel post design with 3 large post holes on each so if you fancy a quad coil build this thing is more than happy to oblige.. 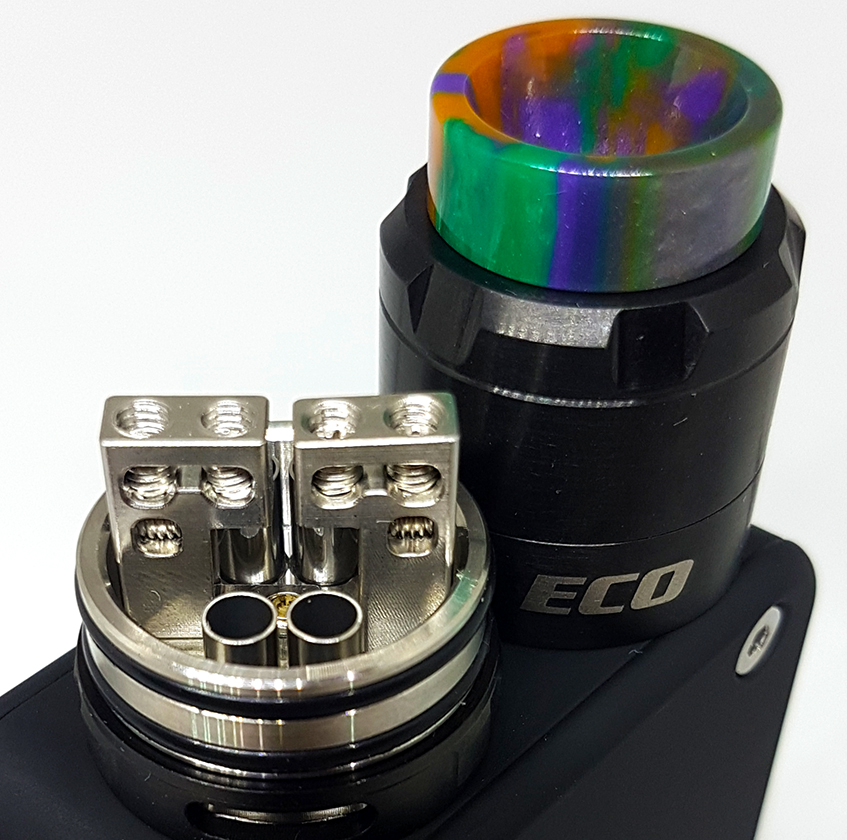 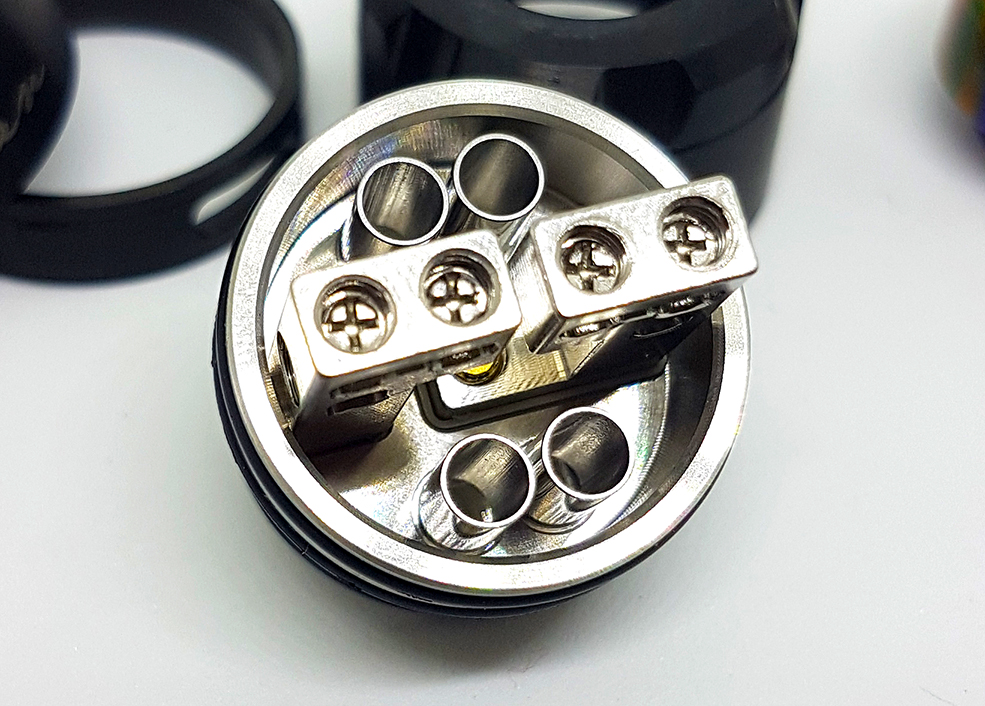 And for maximum conductivity it has a 24k gold plated centre pin which features direct to contact design resulting in minimum voltage drop due to the lack of redirection of electrical current....yeah....it totally has that.....

And with regards to stuff I do understand...this thing looks pretty fucking awesome, I mean iJoy are so proud of this little puppy the CEO of the company 'Willian' has been so bold as to have his name emblazoned on every single one.. 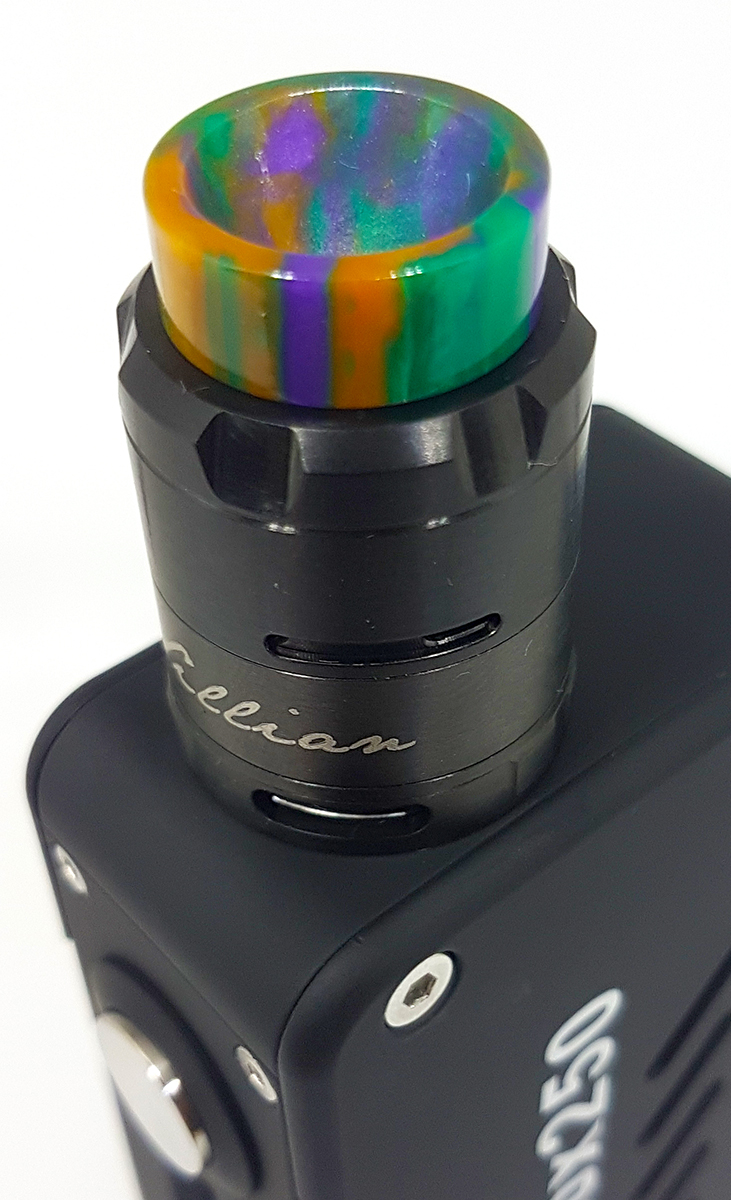 You simply don't do that unless you are sure the product has what it takes to compete in this ridiculously over saturated market.

On with the test, I skipped the quad coil malarkey because...well....I didn't have 4 coils the same at the time so I just chucked these in, billed as 'Centipede coils' from a box of assorted 'Cournament coils'....pretty sure that was meant to say 'Tournament'....from 'Tubro Vape'....also relatively confident that that should be 'Turbo'.....Gearbest...gotta love em...regardless...they looked pretty sweet and ohm'd out at .2 on the duel....my 'Goldilocks' zone. The deck was super easy to build on as expected although I wasn't overly enthusiastic with the Philips head grub screws, I had a slight issue with one of them at first, the thread took some coaxing to grip but it got there in the end. 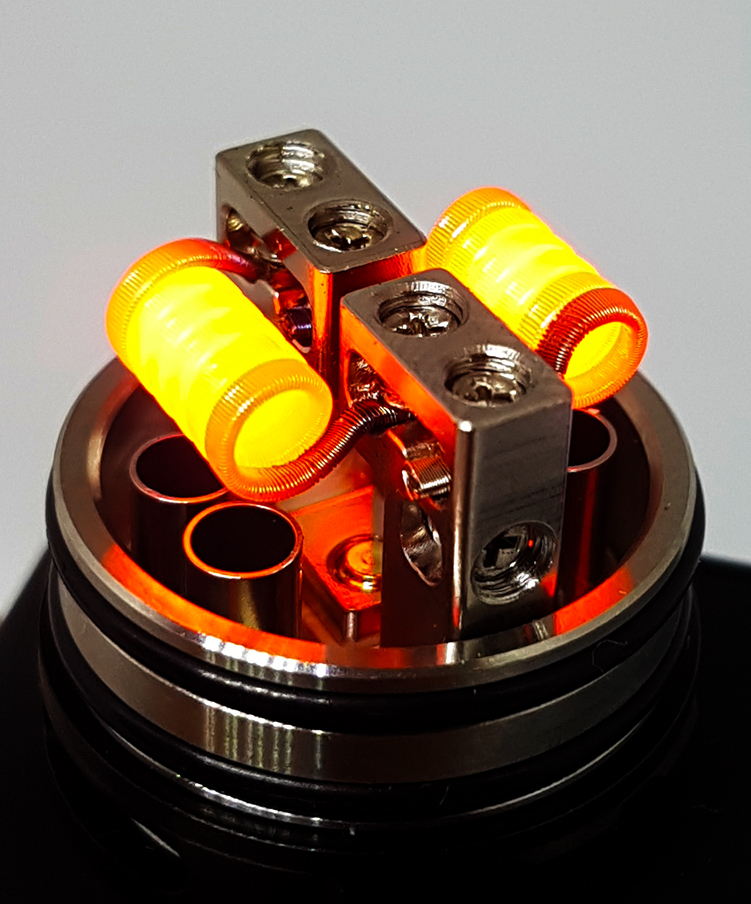 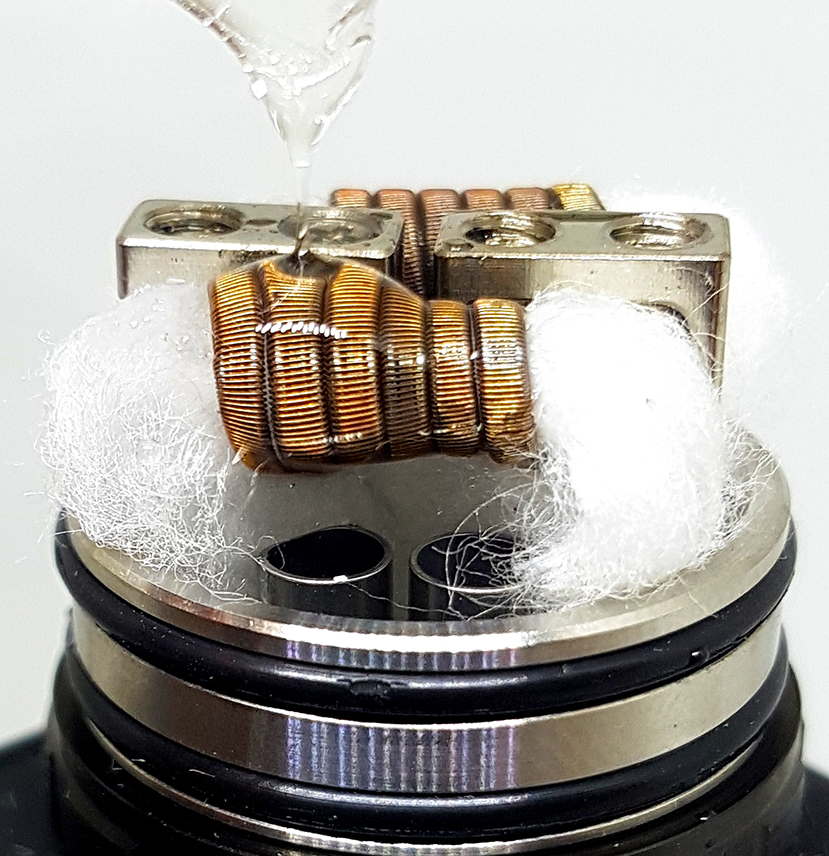 I got her all lubed up and ready for her maiden voyage, Once you replace the top cap however you come across one very confusing feature....you see the top cap is in 2 parts, you have the chamber...as normal, a bell housing if you will....and then you have another top cap which goes over this for the adjustable side airflow.... The airflow is a massive boost to the ECO, you can mix and match to your hearts desire between flavour from the bottom and clouds from the sides....or both.....if you fancy. I tried each and every way and found that in full on flavour mode it wasn't 'unbelievable' but adequate, it certainly didn't bring anything new to the table but it was better than some I have tried lately, I think if you slapped a nice quad coil build in there it would do some wonderful things....but I didn't.... so.....there's that...It certainly threw out the fluffys though.

The build of the ECO is best described as 'chunky'...it's very robust and heavy and gives the impression that you could really punish the thing and give it some serious welly which I am very much a fan of, I have become a bit more inclined towards the heavier metal materials as apposed to the lighter alloy bodies that have cropped up lately in such tops as the Mad dog and the Skill RDA's...I don't know why, I mean they do the same job and the alloys tend to handle the heat better but to me personally it just doesn't feel the same... this Pet however.. is all about the Metal..

In the box you get the full works...almost...2 clapton's (would of been nice to get 4 seeing as it's geared towards a quad build...they'll get this coil business right one day)....some strips of Muji cotton, spare O rings, a few of the shit grub screws and a nice screwdriver...which is also shit. 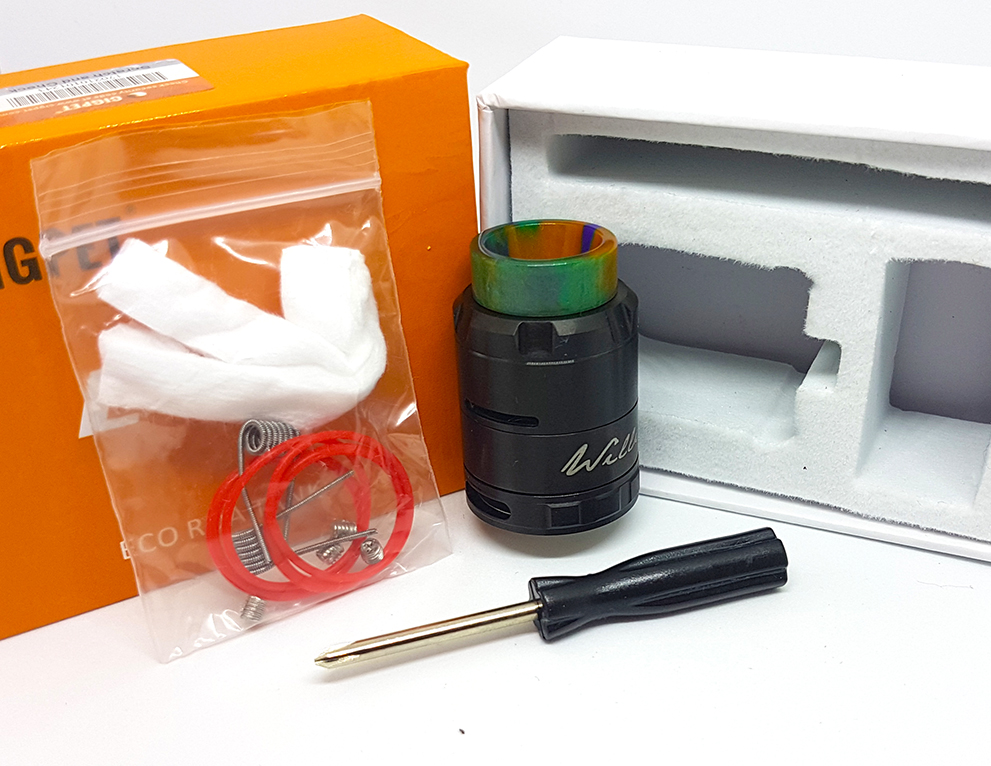 And as for the next list of brain numbing words and numbers well....for something with so many options and good things going for it you'd of thought they'd of sold it a little better in their specs list....

You have to admit...that's a nice lookin RDA....bare in mind that no two resin drip tips will be the same...love that polished SS too.

My final thoughts on the Cigpet (grrr) ECO RDA would be that Cigpet certainly know that there is a market for customised gear and they have made a well crafted product....I wouldn't say 'perfectly' engineered but very very good (for iJoy...no offence) and it has options to please almost any vaper, it's heavy duty, it chucks clouds, gives 'good' flavour and it'll take whatever coils you throw at it and all for around £20...that's not bad in any language.....the name Cigpet though....I just can't get along with that.

and if you use my code APUGS15 at checkout you will be looking at parting with £20.17 for the Black, Gold and Silver and £19.69 for the Stainless which in my opinion is not only the slightly cheaper but better looking RDA.

And here endeth today's pile of literal claptrap...I hope it was all you ever dreamed of and more.

Don't forget...if you haven't already entered in my $100 giveaway you can find it on the Steampugs site, free to enter and 2 weeks until the draw, check the post for more details.

And while you are there take a peruse around my link shop for plenty of juicy bargains to tickle your shiny syndrome and even the odd discount code, I'll even give you a link to make life easier for you....the more you spend the more I'll give away