i recently bought a smoke stick v8 and i have 3 packs of m2 0.15 ohm coils (couldn't get the 0.25)..now i was worrying if i do something dangerous... even if they sell those things like "made for the stick v8" ..so if one uses ohms low ..it would mean on a direct 3.7 volt output with these coils..over 90 watt and around 25 Amps ..but i think it can't output more then 55 watts to the Atomizer)

i have seen some other threads where people were worrying about that..but it was not really clear in the end... (not to me ..lol)

so if i understood everything, it s like that : the stick v8 is a fully regulated mod , just not adjustable (which makes it even safer if understood right). and the main point is, so i understood, that i have two different circuits dealing with each other... the one from the controller to the battery and the one from the controller to the Atomizer (coilhead).. so Smok states, that the stick always fires around 3.7 Volt..which now makes sense to me ..so if it fires at 3.7 , the 3.7 is the constant and the rest ,like the wattage(don't know if the stick allows more than 60 W), varies then around a value which can feed the coil at the end.

so in the end it looks a bit like it doesn't matter at all, which coils i put into the atomizer (maybe they are all have the same safety doesn't matter which resistance)... the calculation would be necessary if you have a direct circuit with battery and atomizer in one..there the voltage would be the most important value i guess, because the discharge-ramp would depend directly from Battery Voltage and Atomizer-Resistance (Which is the only Parameter that can be controlled)...

i have to add ..the smoke stick v8 is a device from smoktech with a 3000 mAh Battery which like most other batteries can stand 20 Amps safely..

so from what i understand now, i am safe with the 0.15 coils..right ? (just if the regulation would fall out, if something like this would be possible)

an answer would be nice and sorry for my poor english

Bronze Contributor
Member For 2 Years
Member For 1 Year
No you are not safe with that set up! Use an ohms law calculator and you'll see. At .15 ohms and 3.7v (your two constants), you're pushing 24.6 amps and 91.2 watts! The .25 ohm coil at 3.7v would only push 14.8 amps at 54.7 watts. You can see how much difference a reduction in coil resistance can make. It's very important with sub-ohm systems to do your calculations before you start changing things!

Member For 2 Years
Member For 1 Year
You're fine. They came with those coils installed. It will step the power down to it's max safe limit. I 100% guarantee that the coil they designed for that tank and stick, will work without issue

dropin_biking said:
You're fine. They came with those coils installed. It will step the power down to it's max safe limit. I 100% guarantee that the coil they designed for that tank and stick, will work without issue
Click to expand...

The only issue you might have is cool vapor. Your mod regulates and applies ohms law. So if the new coils work, they are ok to use. Mechanical mods are different, but regulated have safety protection built in. 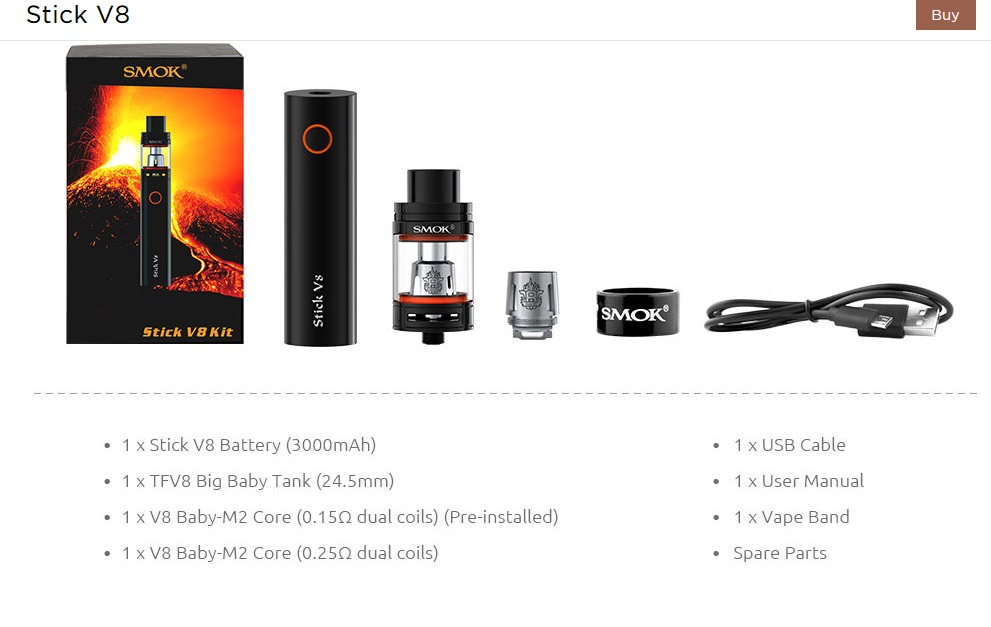 Remember... lower resistance coils take more power to heat up. Resistance determines how much power the coil conducts. We use resistance wire to generate more heat. This is why we generally make coils with a kanthal or nichrome core and wrap with stainless steel (which conducts heat better)
So according to the stats I see... a 0.15 ohm coil will not give as much vapor at 45w as a 0.30 ohm coil would. They should still work and will still be safe. Just remember you need to stay within the limitations of your mod.

Good news is, you have a decent tank. So you can still use it when you get a better mod. That is when your 0.15 ohm coils will make a difference.... when you can get full benefit from the greater amount of vapor they can produce.

The 0.15 ohm coils were made for that power level. Using higher ga wire which heats faster (higher resistance). I wont go into the actual math.
Last edited: Oct 29, 2017
K

Bronze Contributor
Member For 2 Years
Member For 1 Year
Oh God! I totally misread the OP. MY BAD! That's what I get for posting and eating lunch at the same time. I retract my previous post, your totally safe. That's what I love about the forums, if your wrong, others will correct you. My apologies cb1974, I promise to read more carefully in the future, and not around a cheeseburger!
M

Member For 2 Years
Member For 1 Year
Good info though i tend to stick on factory setup, will try mod someday. cheers

This model (3000mah) actually has a ton of safety features that were not available on the 2000mah model. The M2 coils were made for this specific battery as well. Including low resistance protection. Should be perfectly safe if used as intended. I have no idea what would happen with a different tank and coil set up as I couldn't find any info on what the low resistance cut off actually was.