How would you design your perfect pod system?

I’d go for MTL only, autodraw, minimalist aesthetics and closed pods – the Havok is exactly the opposite of that, but I’ll forgive it, because it’s also very good. 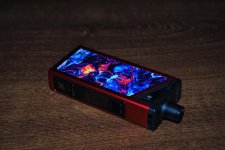 Design wise, it’s like a big version of the Smoant Pasito, or Lost Vape Orion, with a diagonal cutout from the allow body, that allows you to see juice levels in the pod. 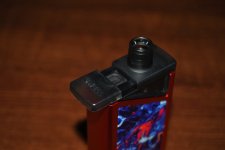 The chipset seems to a bit nicer than the standard pod chipset – while it doesn’t have many fancy functions or modes for you to play with, it fires quickly and does everything I need – I would have liked autodraw though.

As the battery depletes, the device actually displays the true wattage rather than the set wattage, also while the chipset will go up to 65w, it won’t let you exceed the recommended wattage for each coil.

The buttons are clicky and responsive, however there is slight button rattle if you shake it around, trying to make it rattle.

As with other Uwell products that I’ve tried, both coils give excellent flavor – pod systems nowadays are generally good, but Uwell seems to be a step ahead of most companies when it comes to coil flavor. I really can’t say anything bad about these coils, the flavors are accurate and intense, no matter what juice I use, there are no leaks and they are lasting well – well enough that at the time of me typing this review, they are still giving good flavor with no signs of dying. 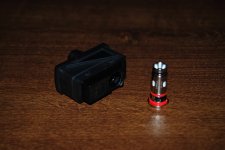 Obviously this depends very much on your power settings and how frequently you use it, but the Havok’s battery lasts well and performs well even when the levels are getting low.

A full charge took me about 90minutes.

The actual pod is a mix of mostly good and a little bad, 4ml capacity is great and so is the top-fill system – however it would have made the Havok almost perfect if the drip-tip was removable, for two reasons. Firstly, I want a narrow bore drip-tip for MTL and wider for restricted DTL – also the drip-tip gets in the way when I try to fill the pod from a 100ml bottle -having it removable would resolve that problem.

The airflow goes from slightly restricted DTL to very very tight MTL – tighter than I could imagine me ever using – this is an excellent airflow range and while you can’t adjust it as precisely as with on an RTA with an airflow control ring, it’s still much better than on most pod systems that I’ve used.

The only problem that I have with the airflow, is that you have to remove the pod to adjust it, this is made more frustrating by the fact that when you look at the design of the Havok, it seems that it would have been very easy to put a small cutout in the body that would have exposed the airflow control, to allow adjustments without removing the pod.

I won’t dwell on styling too much, because that’s all down to personal taste, however while I would have preferred the styling if it had no plastic panel or logos/branding on the rear, it looks a little less garish in reality than in pictures.

Testing and reviewing the Havok was strange for me, on the surface it’s exactly what I don’t want from my pod system. The only pod systems that I really enjoy using are tiny, simple and low powered like the ZQ Xtal and Geekvape Wenax K1, for everything else I want an RDA or RTA.

However, sitting at my desk with a selection of RTAs, all wicked up, full of juice and sitting on mods, I find myself reaching for the Havok.

Overall, it’s one of the better pod systems that I’ve tried over the last year or so.