The latest member of the Kylin series of RTA's is a Mesh RTA and very much in competition with the Profile Unity. The Kylin M makes use of the existing Profile deck, obviously it's such a good design Vandyvape can't come up with an idea of their own. The Kylin M is a much more simpler design than the profile and a shorter RTA, hosting top airflow allowing wicking to be done in a traditional way rather than a need for a complex design. Coming with 2 types of pre-cut mesh, Cotton, all the spares and tools needed, the Kylin M is going to be an interesting RTA to take a close look at! 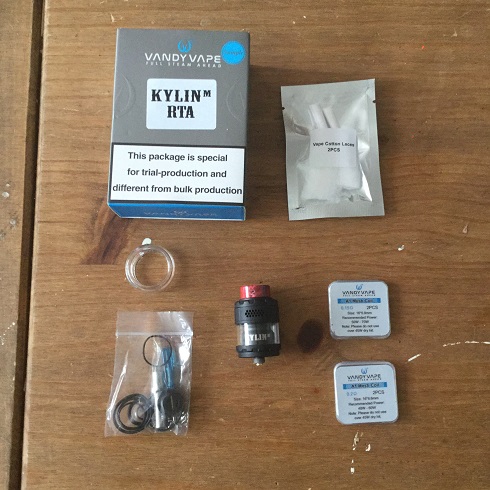 The Kylin M RTA came in Sample packaging that consists of a Blue cardboard box with Silver Sleeve. I received the Matte Black version which comes with a Red Resin Goon fit 810 drip tip, it's also available in SS, Blue, Gunmetal, Gold, Frosted Grey and Rainbow, all versions come with a Resin drip tip in a colour that matches or suits the colour of the RTA. The RTA has castle style design top and bottom for both aesthetics and grip with the bottom section stepping down to the base, likewise their is a small step to the drip tip up top. The airflow is dual honeycomb design making the airflow control ring much wider than normal and is situated just under the top-cap as the Kylin M has top-airflow. Looking through the glass tube "KYLIN M" is printed on the chamber, moving to the base we have plenty of printed branding and safety marks. The 510 protrudes and is Gold plated and for some strange reason the 510 threading has a media blast finish. The build quality is very good as recent Vandyvape products have been and i find is quite aesthetically pleasing. 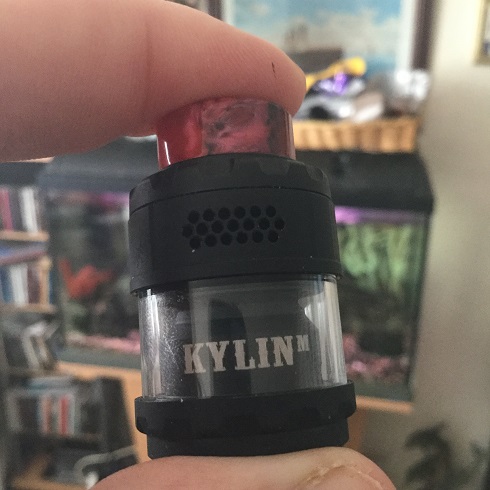 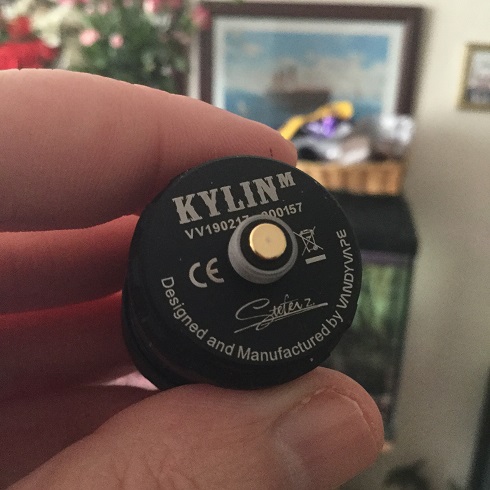 I will refer to the deck as the Profile deck has it's a blatant copy but let's not be too harsh. Vaping has developed into what it has become from using existing ideas and designs and incorporating them along with new ideas, that's how it has and always will work in vaping. Despite it being the profile deck Vandyvape have made a couple of tweaks for the better, the clamps are spring loaded and the deck section spins freely to allow for the tank to be fastened together while on your device. 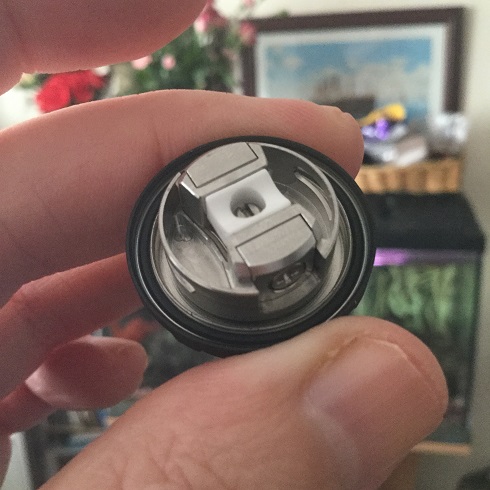 Up top as mentioned we have a Resin 810 which has a wide bore and is a Goon style fit so you can use other Goon style 810's if you prefer, a 510 adaptor is also included. We then have the top-cap which has fine but long threading so a bit of patience needed when filling but it's noticeable how silky smooth the threading is. The fill ports are a good size and the usual kidney shape but sit very deep down so their is quite some distance from the opening at the top of the RTA and the fill ports, this is to allow for the hidden angled airflow chutes. The fill section with airflow system and chamber is all one piece but the airflow control ring is removable. The glass section is secured and sealed via o-rings top and bottom, the Kylin M comes pre-installed with a 3ml straight glass, also included is a 4.5ml bubble glass if you want more capacity and don't mind the bubble glass look. Finally we have the base section which accommodates the already mentioned Profile deck. 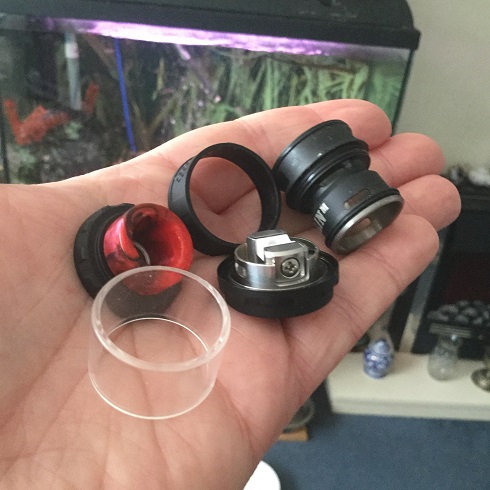 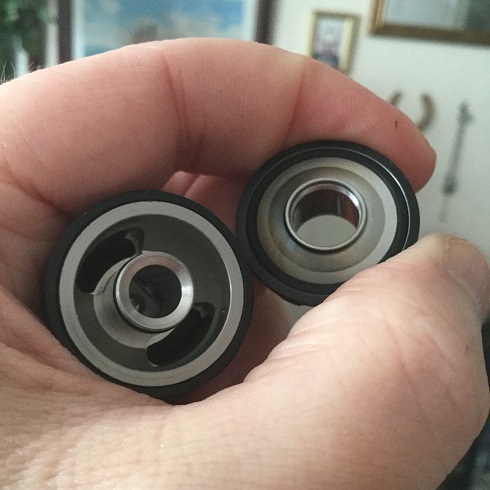 The Kylin M has a top airflow design which is controlled using the dual honeycomb airflow control ring which has a stopper, each side their is 3 rows of holes, 6 holes in the top and bottom rows and 7 in the middle row giving a total of 19 holes each side. When taking the control ring off you can see the airflow openings and how they are deeply angled down very much like chutes, the opposite openings of the chutes come out on the inside of the domed ceiling of the chamber. The openings in the ceiling of the chamber are shaped similar to fill ports but narrower and obviously follow the domed contour of the chamber giving very good air coverage to the entire mesh. Towards the bottom of the chamber lined up with the airflow inlets we have grooves that slot into the cutout sections of the deck where the screws are tightened, this locks the chamber in position ensuring the airflow is correctly lined up with the mesh. 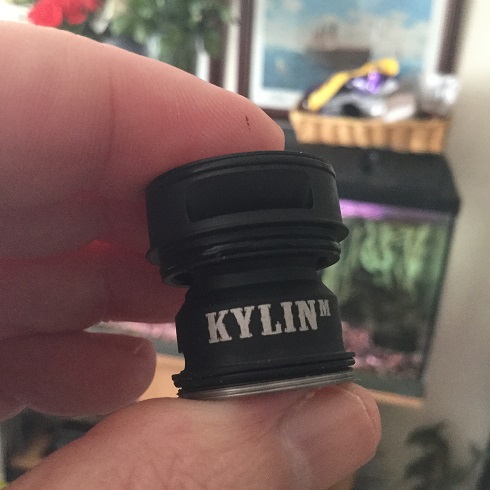 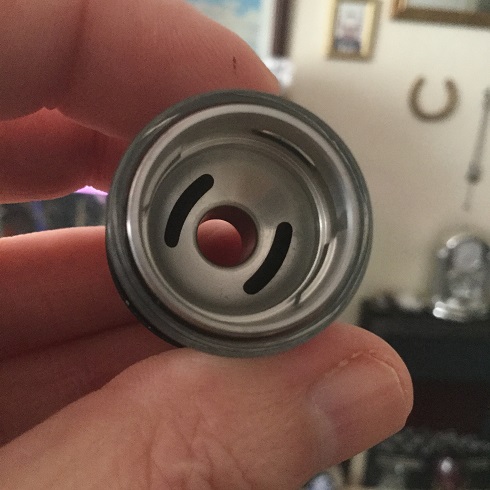 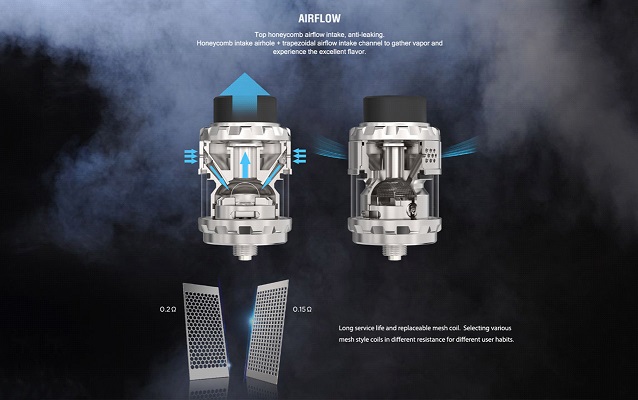 
Mesh needs total contact with the wicking material and a combination of the flexible mesh and cotton which expands, then shrinks as it dry's and also can sag and change shape as it's constantly expanding shrinking and sagging means with all the best will in the world trying to keep cotton touching the entire surface area of the mesh is a big problem. It has worked perfectly with stock coils as the cotton is packed between the mesh and the outer shell of the coil head so the cotton always covers the mesh surface area. The spring loaded ceramic seat directly underneath where the Mesh domes over from post to post is the perfect solution so no wonder why the idea has been copied and we will see the spring loaded ceramic seat many times in the future. The Ceramic seat pushes the cotton against the mesh and has the cotton expands, then shrinks etc the ceramic constantly pushes the cotton against the mesh with the spring allowing it to lower or raise to achieve this.

The Deck and Build

The Deck is very simple with a vertical sitting clamp each side for the end of your mesh to slide into. The grub screws are on the sides, so simply loosen the screws, slide your mesh ends evenly in place and tighten the screws it's that easy. The grub screws are combo flathead/phillips which is a plus and to make it even easier you are supplied with a simple tool to bend the mesh around before fitting, it bends the mesh to the perfect shape (another copied idea from the Profile). You get supplied with 2 pieces of Kanthal 0.15ohm mesh that is rated between 50W and 70W and 2 pieces of Kanthal 0.2ohm mesh rated between 40W and 60W. Before wicking pulse your mesh at about 15w (20w max) to get rid of any hot spots and burn off any residue from manufacture. Wicking is done very generously and you get supplied with 2 shoelace cotton pieces which are 6mm in diameter purpose made for wicking the mesh, both the 2 kinds of mesh strips and cotton for the Kylin M RTA are available in packs of 10. Although plenty of cotton is needed and you need to get plenty into the wicking ports make sure it's not too densely packed has you are relying on capillary action to keep a lot of cotton saturated. 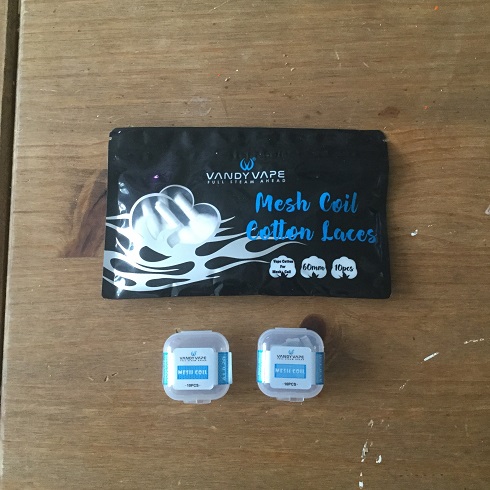 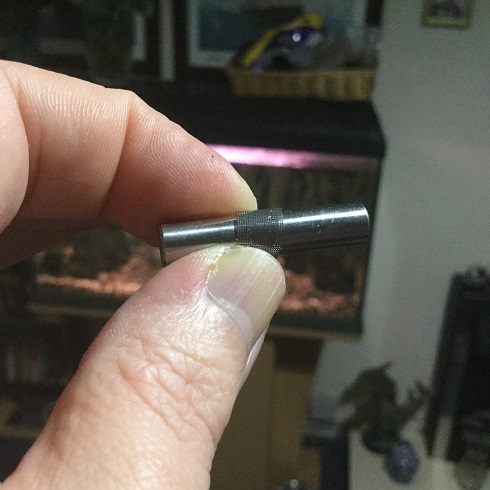 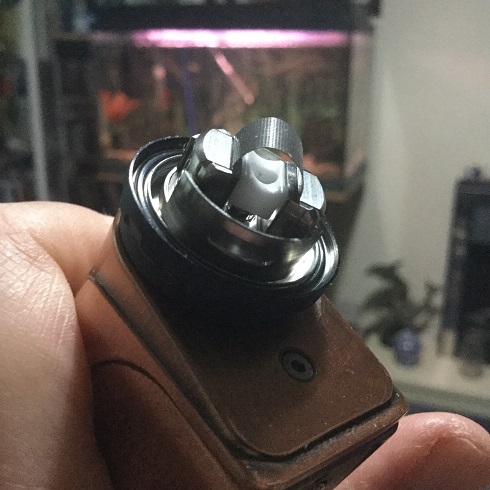 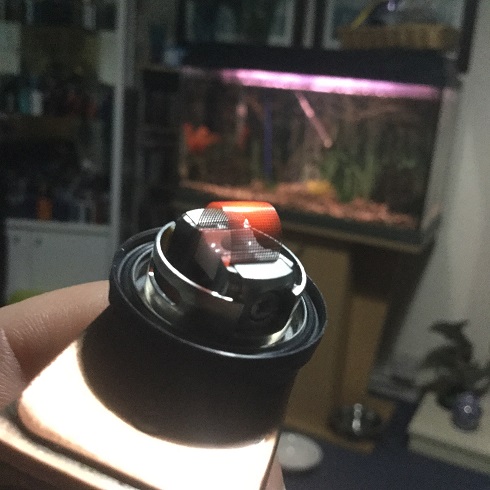 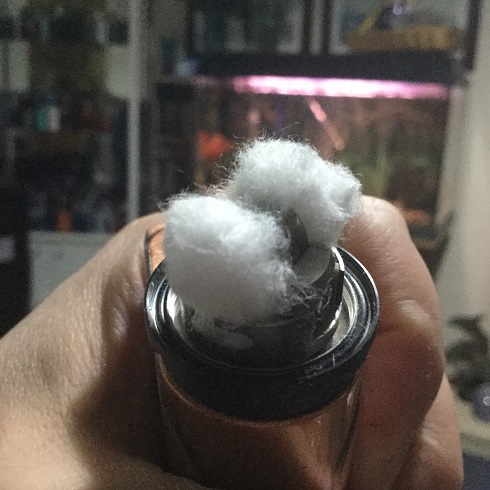 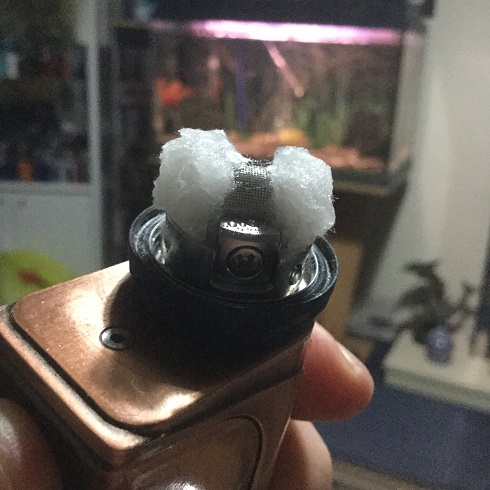 Before i used the Kylin M RTA alarm bells rang when reading the specs of the two different kinds of supplied Mesh strips although a lot of times manufacturer recommendations don't necessarily mean a lot. The 0.15ohm mesh is recommended between 50-70W and the 0.2ohm mesh is recommended between 40-60w yet both say don't use over 45W else you will get dry hits. If this information is taken at face value they are basically saying we have supplied you with 2 different kinds of mesh strips that are not really suitable for the RTA they have been supplied with?

My Experience Using The Kylin M

With the wicking not too tightly packed into the wicking channels i found i was able to vape at 45W with the 0.2ohm mesh and 60W with the 0.15ohm mesh any higher with either a dry hit threatened and the last thing i want vaping using mesh is a dry hit so kept to these wattage's. The flavour from both was good with the 0.15ohm mesh having a slight edge but both was down on flavour compared to using the Profile Unity. I didn't spend much time with either supplied mesh before deciding to give OFRF nexMESH a try (which is what i buy for use in both the Profile RDA and Unity RTA). I found using the nexMESH with the slightly lower ohms allowed me to go to 70W before a dry hit threatened but actually preferred the flavour at 60W which when i tried some chain vaping it still wicked just fine. The flavour when using nexMESH is matching the Profile without question, but they are so closely matched and i really can't say one gives better flavour over the other. The airflow is smooth and although a slight restriction does give more air than the Profile and slightly closed it down to three quarters open rather than fully open which is how i have the airflow using the Profile. The Kylin M does have certain things against it the main being lack of innovation because it's a copycat deck but if that doesn't bother you then when paired with OFRF nexMESH it's performance and flavour it gives is impressive. 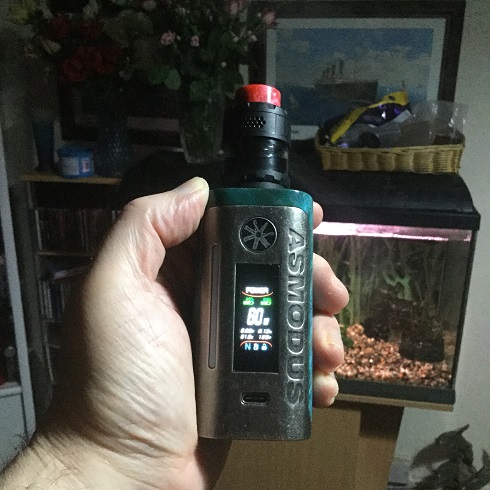 I would once again like to thank Ariel for supplying the Kylin M RTA for the purpose of this review.