I tend to take claims of “supports single and dual-coils” with a pinch of salt, there’s usually a compromise somewhere.

However, when I saw pictures of the SRPNT RDA with a huge 5mm single-coil filling out the deck, I had a little more confidence in it achieving both.

I’m always very happy to see Wotofo coils and drip-tips, almost everything I use with an 810 drip-tip, ends up with something from Wotofo and as far as mass produced coils go, Wotofo’s are decent.

I like the styling of the Serpent, the logo is subtle, the detailing is nice, and overall it’s quite a restrained design. (unless you have the gold one like me)

There’s nothing to complain about when it comes to build quality, everything fits together well and O-ring tolerances are good, once they get a little juice on them. 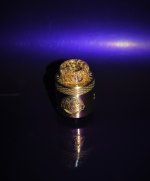 I’m always in two minds when it comes to deck design – postless is awesome, because it gives more space for side airflow, posts are also awesome, because they don’t require pre-cutting of coils legs.

The deck has two pairs of posts, with nice little ledges which trap your coils legs nicely and make putting coils in very easy, it also means that in single-coil configuration, it doesn’t matter which way your coil is wrapped.

I found that this RDA is pretty flexible regarding coil height, especially with the 5mm coil, as long as the airflow is hitting somewhere around the bottom to middle of the coil, it performs well.

However, this deck gives me one problem – the airflow is between the posts which limits the width of the airflow, while the actual amount of airflow is great, I like my airflow to hit the entire width of my coil (unless I’m using an MTL atomizer).

Wicking is as simple as any RDA, for the 5mm coil I just used a chunk of cotton bacon, rather than the supplied cotton which worked just fine.

The top-cap has a ring which you twist in order to rotate the inner barrel, giving you the options of 4×1.9mm, 4×1.6mm and 2×1.6mm airflow that line up with the four holes on the outer barrel.

The airflow is smooth, slightly restricted and turbulence free, however there wasn’t any noticeable difference between the 4×1.6mm and 4×1.9mm holes – I couldn’t see which one I had selected and neither could I feel any difference.

This didn’t create any issues for me, because I found whichever of the four hole settings I chose to be good and the two holes are nice when you want to close things down. 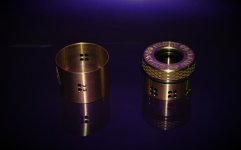 In dual-coil mode, it performed just as you’d expect a dual-coil RDA with side airflow to perform, nothing revolutionary, but smooth airflow and decent flavor.

At around 70-80w, with the airflow open was the sweet spot using the supplied coils, I’d put in on a par with my previous favorite dual-coil RDA, the Geekvape Tengu.

However, I was far interested in the single-coil configuration.

Firstly, while you don’t have to use a 5mm coil, I wouldn’t go under 4mm – I tried a 3mm coil and it wasn’t good enough.

I tried a lot of different single-coil builds, the supplied 5mm coil does work really well, but even though you can buy the 5mm coils (and cotton) from Wotofo, it’s probably not something you’re going to find in your local vape store, so I wanted to focus on my own coils.

As long as you stick to 4–5mm coils, the Serpent is quite versatile, I used a 24g clapton at 70w and while this was higher power than I usually vape at, the flavor was excellent.

I then found my favorite build – 28g fused clapton, 5mm, 0.55ohm – at 45-55w this build gives nice flavor, a lot of vapor production and most importantly was within my desired wattage range.

Finally, I started to get thoughts about vertical coils – the airflow seemed to be in the perfect position, the posts would be no problem – so, I put a 4mm 28g fused clapton vertical coil in with minimal issues. The flavor wasn’t as good as with the regular single build, but with a little experimentation with coil height, the flavor improved and it was an overall decent vape.

Is there anything else it can do? I’m thinking dual stovetop coils, they will fit, I’m sure – I’m just haven’t worked out exactly how I would get the wicking to work. 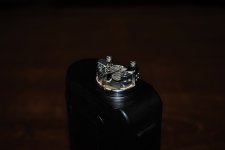 So, is this an RDA that performs well with dual and single-coils without compromise? Not exactly, you’re unlikely to fit duals over 3mm and you’re going to want to use 4mm+ in single-coil mode – but that’s a more than acceptable compromise in my eyes.

This is probably down to my single-coil bias, but I see the SRPNT as a good single-coil RDA that performs well with a large coil, that you can squeeze duals into, if you feel like it.

I really enjoyed using a 5mm coil, it allowed me to build something that produces good flavor and vapor, while keeping the resistance relatively high and power low.

What I really like about this RDA is the versatility – not just the fact that it takes single, dual and vertical builds, but also the ability to perform well from 45-80w – this is a good RDA for people who like to experiment and try a lot of different builds.