Silver Contributor
Member For 4 Years
Member For 3 Years
Member For 2 Years
Member For 1 Year
Member For 5 Years
My story is a little different than most. See, I quit smoking a few years ago. I was rolling my own cigs, and had just bought a big bag of tobacco, tubes and a rolling machine. But I kept seeing commercials on TV about people having strokes, heart attacks, amputations, etc from smoking and one day I just said, no, that's not happening to me. I put the tobacco on top of my fridge, finished the smokes I had rolled, and never touched it again. Now, I bummed a few cigarettes here and there, but for the most part remained tobacco free. At the end of last year, I was attending beauty school. I'm a man, but my goal was to go on and get my barbers license. That hasn't happened and I don't think it will. But I was attending school with a bunch of teeny boppers, which I guess I should have expected. I'm in my 30's, and teeny boppers annoy the shit out of me to a point that I cannot even accurately describe. Not every young person, just the shallow stupid ones. One of them in particular mouthed off to me because of my opinions over certain rap artists. So I got really stressed out to the point I needed something, but did not want to go back to cigarettes. A friend of mine had recently started vaping, and suggested I give it a try. I did, and I found that I enjoyed the flavors as much as the nicotine. Near as I can tell from Facebook posts, I started vaping a week or so before last Christmas.

I started vaping in October of 2013. I didn't intend to quit cigarettes I just wanted to have nicotine in case I couldn't afford cigarettes (like at the end of the month). I was a duel user for about two weeks or so then suddenly couldn't stand the taste of a cigarette. I've tried to smoke 1 since and couldnt because it tasted so horrible.

Tomorrow morning at around 7:30 AM will be my 2 year vapeversary!
Z

Member For 4 Years
Yay Me! I'm on a legit 1 month, 5 days no cigarettes! And I started vaping awhile ago (501 and DSE's, I"ll post a pic sometime)
Sub-ohm did the trick, I'm satiated.

When I first switched over i was vaping an 8mg e-juice but since then I've cut it down to 3mg. I literally just dumped the remainder of the 8mg in the garbage because it feels too strong now! 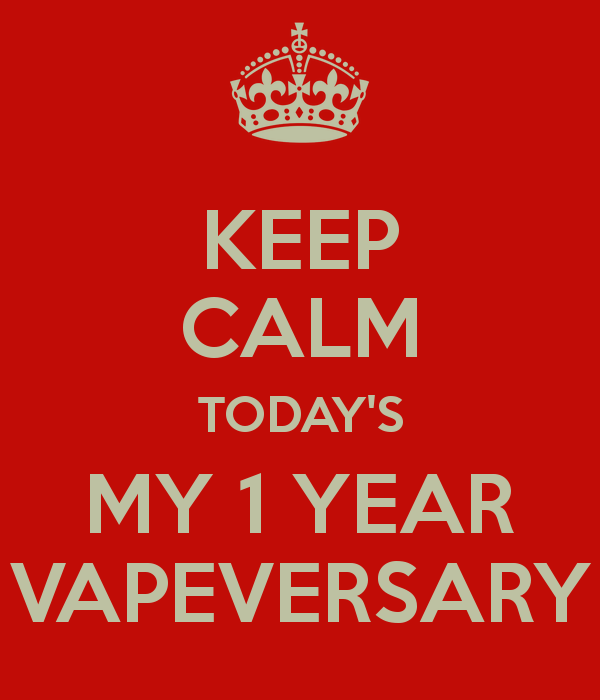 Considering I've never really finished anything I've started, other than pregnancy, a bowel movement, and at least one marriage (and I'm pretty sure the latter two fall into the same category), I'm pretty proud of myself to be FINISHED with cigarettes.

Silver Contributor
Member For 5 Years
VU Patreon
Today is my 2nd Vapeversary. Yay. Two years and only 1 tobacco cig which was offered to me in a bar. I did like the throat hit, but it tasted like ass with a splash of menthol. I refused a second cig and went back to my lovely flavor, Cactus Dew in a mini dripper on an ego t styled battery.

40+ years of being addicted to tobacco is finally behind me. You can do it too.

FL_David said:
Today is my 2nd Vapeversary. Yay. Two years and only 1 tobacco cig which was offered to me in a bar. I did like the throat hit, but it tasted like ass with a splash of menthol. I refused a second cig and went back to my lovely flavor, Cactus Dew in a mini dripper on an ego t styled battery.

40+ years of being addicted to tobacco is finally behind me. You can do it too.
Click to expand...

Silver Contributor
Member For 5 Years
Stupid, oversized banner pretty much tells the story. As usual, late to the party, even my own.

SailCat said:
Stupid, oversized banner pretty much tells the story. As usual, late to the party, even my own.

Your banner isn't at all over-sized. It's one of the smaller ones I've seen.

Silver Contributor
Member For 5 Years
Thanks, Huck, as always. Size is relative, I guess. 'Think I'll celebrate with something a little more understated.

Diamond Contributor
Member For 4 Years
Congrats to all the new Vapeversaries!!!!!!!!!!

Gold Contributor
Member For 4 Years
I just realized via my expense manager that my last pack of smokes was Christmas Eve. Wow. Time flies.

Bronze Contributor
Member For 4 Years
Member For 3 Years
Day 77 since my last cigarette and first "real" vape. After 33 years at 2 packs/day it was almost too easy ..... but I'll take it! 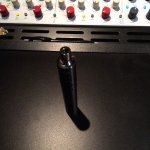 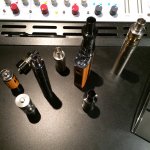 And that doesn't include the boxes of juices and other miscellaneous accessories.

And *NOW* I find that my health insurance policy CONSIDERS VAPING "TOBACCO" and my surcharge continues...

Silver Contributor
Member For 5 Years
You ain't alone ... in either case.

Congratulations on the milestone and don't be discouraged by the reality dose from those insurance folks. They've lagging behind the technology and health studies regarding vaping over smoking and have some catching up to do.

CTFX said:
I'd rather smell like a bakery than smell like nasty tobacco that permeates clothing and skin

You got that right!

Markw4mms said:
You got that right!
Click to expand...

You couldn't pay me enough to pick up a cigarette again.

Markw4mms said:
You couldn't pay me enough to pick up a cigarette again.
Click to expand...

Even if I were offered a million dollars I wouldnt, because that one cigarette that was picked up could be the lead to further complications, and or death. So yes, I agree whole-heartedly my friend

Bronze Contributor
Member For 4 Years
Two years vaping this month after smoking cigarettes for over 50 years. So glad I switched.

Silver Contributor
Member For 5 Years
Congrats, Mykline! I'd say you're over the hump.

SailCat said:
Congrats, Mykline! I'd say you're over the hump.
Click to expand...

That is for sure. Stopped smoking the first day I started vaping and haven't looked back. Wish I had started sooner.

Two months before, I landed in the hospital with a massive jaw infection that ended up in multiple incisions inside my mouth and IV antibiotics for 6 weeks through a PIC line. It was at that moment, I took a good look at the pack of smokes I had in my hand and made a promise to myself, my family and most importantly my girlfriend who stayed by my side every moment. Driving me to the hospital 3 times a day and keeping track of mountain of antibiotics and opioids they had me on. it's all a blur now.

Off I went to the closest vape shop. Started at 16mg and within a month was down to 5. I did try a smoke sometime in December but nearly blew chunks after the first drag. No thanks...

Congrats to everyone in this thread for kicking the stinkies... I've never felt better and can't wait to get back on my bike as soon as this snow finishing melting off!

I guess thats an easy way to remember your anniversary. LOL Congrats on both.

Bronze Contributor
Member For 4 Years
Hit the 2 year mark last week and so glad I gave up the cigarettes. Prayers for your dad @CTFX.

CTFX said:
Not really a vapeaversary more so a forumversary! I've been here for a year now!

Prayers are still needed for my dad!
Click to expand...

In 4 months I will have been here 2 years. Time just flies by when your having fun.

Mykline said:
In 4 months I will have been here 2 years. Time just flies by when your having fun.

Sent from my SM-N920T using Tapatalk
Click to expand...

Silver Contributor
Member For 4 Years
I started vaping around April fools' day 2012. I both vaped and smoked for a couple of weeks so this is pretty much my four year vapeversary

It's been a neat ride