FDA Crackdown Could Mean the End of Sweetness in Vaping 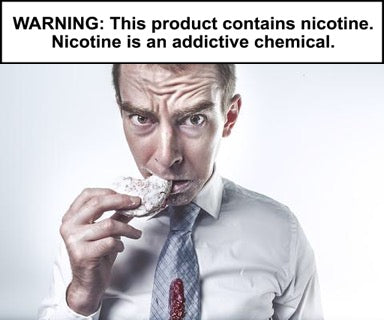 Vapers currently have a choice of a virtually endless spectrum of flavors—there's fruit, candy, desserts, donuts, cereal, coffee and the list goes on. However, a potential federal government crackdown on the industry could turn the technicolor rainbow of vaping flavors into a drab world of black-and-white. Or should we say...tobacco and menthol.

Last week, U.S. Food and Drug Administration (FDA) threatened to prohibit five major vaping companies from selling flavored liquid pods if they don’t do something to combat what the government has called an epidemic of underage vaping.


The announcement sent a chill across the the vaping industry, because studies have shown that adults who quit smoking credit the choice of flavors as a major reason they switched to vaping. The conundrum, of course, is that the very same flavors that are so attractive to adults are also popular with kids.


A recent study of adult vapers found that a whopping 89 percent of them preferred fruit, dessert and candy flavors. In contrast, tobacco and menthol flavors were among the least popular. Menthol was the choice of a mere 2.5 percent of those surveyed. Tobacco flavor fared even worse at 2 percent. (As a reminder, menthol and tobacco are the only two legal variants of good, old-fashioned combustible cigarettes.)


If the FDA did impose a flavor ban, those would be the only two flavors left to remain standing. And that is a possible outcome if the companies fingered by the FDA (JUUL, Vuse, MarkTen, Blu, and Logic) fail to come up with convincing plans to stem the popularity of youth vaping.


So why is it that menthol and tobacco flavors are the stepchildren of vaping aficionados?


Hard to know exactly, but we’d guess it’s largely because people switching to vaping from cigarettes are looking to mimic the tobacco and menthol flavor in their vaping experience. But it’s a big challenge to recreate the same taste and authentic experience of smoking tobacco without the burning combustion of a cigarette. On top of that, users most often end up preferring flavors that help them disassociate vaping from smoking entirely.

That being said, there are notable tobacco and menthol flavors on the market available in both pods and e-liquids:


Breazy’s top-selling tobacco flavors include American Patriots by NKD, Tobacco Salt E-Liquid, and Jon Wayne Uncle Junks Genius E-Juice. In the pod category, Virginia Tobacco JUUL Pods rank high. Each of these options has a distinctive taste that closely replicates the authentic flavor, or in some cases, brings something new to the table beyond the typical tobacco taste of burning cigarettes.


Some of our more popular varieties of menthol in refillable e-liquids are Menthol by Nic Salt Gost Vapor, Menthol Ice by Mr. Salt-E E Liquid, and Menthol by Clouds Vapor. For pods, one of our personal favorites is JUUL Classic Menthol. MYLÉ Mighty Mint Pods and MarkTen Menthol Refill Cartridges are also top sellers in our menthol category. Just like the tobacco flavors, each menthol-flavored e-liquid is distinct in its blend and flavor, and some are simply higher quality e-liquids.


While tobacco and menthol flavors can offer a nicotine fix to satisfy cravings, that’s only a small part of what makes the vaping experience an actual experience. If the flavor ban goes through, one thing is clear: The colorful vaping industry would become much more monotone and all those adult vapers out there who have a sweet tooth would be out of luck. We imagine it would be like having access to only black-and-white television or food only seasoned with salt and pepper.


It’s also unclear what would happen to vapers who choose flavors to stay off combustible cigarettes if they no longer have that choice. But public health officials are hedging their bets that vaping will be far less attractive to underage people if they can’t get ahold of the sweet stuff.

Member For 1 Year
So let's see, so the FDA would rather more adults die of lung cancer than to trust that parents are doing their job of keeping their kids in line.

VU Donator
Diamond Contributor
ECF Refugee
Member For 5 Years
And just because you can't buy flavored ejuice, doesn't mean you can't make your own! Sheesh. This is what happens in a population of adult-sized children who sits and waits for permission for everything, no initiative whatever. Are you folks just whipped by the goddamned FDA??? FUCK 'EM! my sweet vape won't be going anywhere.

Gold Contributor
Member For 3 Years
VU Patreon
I used Uncle Junks Jon Wayne for about 6 mos and it was good.
Got me off the smokes. Tobacco flavor, yes , but also caramel and Honey it if I remember right. If the FDA makes them.pull those 2 flavors out of it, it's going to taste like shit.

I am a BOT

VU Donator
Diamond Contributor
Member For 4 Years
All of this was supposed to have already happened.
We got a few years reprieve.
Supposedly no vape products not on US market before 8-8-2016 would not be available for sale or import now and actually none back to 2007 I think....

I take what I can get. I have hardware for a minimum of 20 years, Nicotine for 30 years, and even non banned consumables for the next couple of years.

Member For 1 Year
I'm thinking it would be a good time to:
Looks like werew going to get screwed again... Thanks KIDS

Rmh said:
I'm thinking it would be a good time to:
Looks like werew going to get screwed again... Thanks KIDS
Click to expand...

There's a GAZILLION DIY threads, sites, and vapers willing to talk your ear off about it!